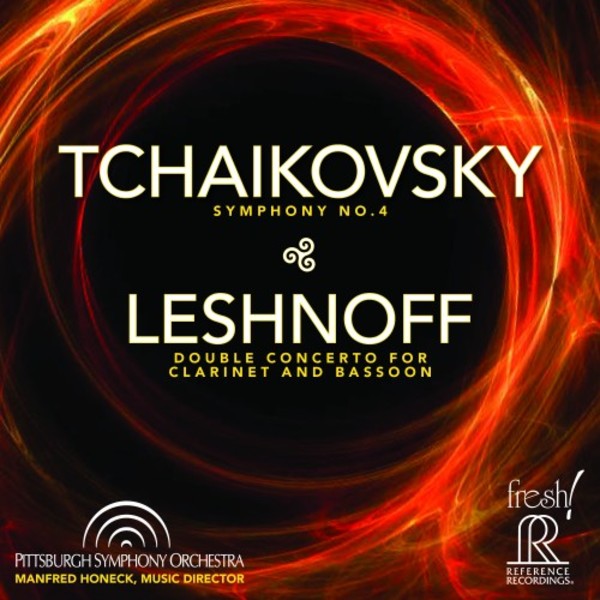 Double Concerto for clarinet and bassoon

Double Concerto for clarinet and bassoon

Reference Recordings proudly presents Tchaikovskys Symphony no.4 in an exquisite interpretation from Manfred Honeck and the Pittsburgh Symphony Orchestra. It is coupled with a world premiere recording of leading American composer Jonathan Leshnoffs Double Concerto for Clarinet and Bassoon, featuring the extraordinary talents of the Pittsburgh Symphonys own Principal Clarinet Michael Rusinek and Principal Bassoon Nancy Goeres. This hybrid SACD release was recorded in beautiful and historic Heinz Hall, home of the Pittsburgh Symphony Orchestra, in superb audiophile sound.
Maestro Honeck honours us again with his meticulous music notes, in which he gives us great insight into his interpretation as well as the history and musical structure of Tchaikovskys great Symphony no.4.
This release is the tenth in the highly acclaimed Pittsburgh Live! series of multi-channel hybrid SACD releases on the FRESH! imprint from Reference Recordings. This series has received Grammy Nominations in 2015, 2016, 2018, 2019 and 2020. Its recording of Shostakovichs Symphony no.5 and Barber Adagio for Strings won the 2018 Grammy Awards for Best Orchestral Performance and Best Engineered Classical Album.
The Pittsburgh Symphony Orchestra, known for its artistic excellence for more than 120 years, is credited with a rich history of the worlds finest conductors and musicians. Past music directors have included many of the greats, including Fritz Reiner, William Steinberg, André Previn, Lorin Maazel and Mariss Jansons. This tradition of outstanding international music directors was furthered in autumn 2008, when Austrian conductor Manfred Honeck became music director of the Pittsburgh Symphony.