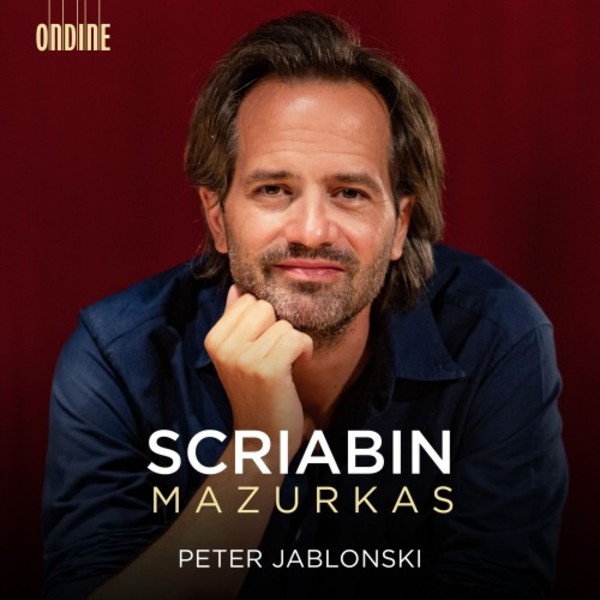 » no.3 Impromptu in A major

» no.3 Impromptu in A major

This album marks Peter Jablonskis debut for the Ondine label. Alexander Scriabin (18721915) created an impressive catalogue of works for the piano and became one of the great innovators in 20th century music. In his early works, the listener can sense the composers great admiration for the art of Frédéric Chopin. This is especially manifested in the over 20 Mazurkas that Scriabin wrote for the solo piano, the very same form of music that Chopin followed throughout his active years as a composer. Jablonskis album includes all Scriabins Mazurkas with an opus number as well as two early Mazurkas.

Peter Jablonski is an internationally acclaimed Swedish pianist. Discovered by Claudio Abbado and Vladimir Ashkenazy and signed by Decca at the age of 17, he went on to perform, collaborate, and record with over 150 of the worlds leading orchestras and conductors, including the Philharmonia, Royal Philharmonic Orchestra, Leipzig Gewandhaus, Mariinsky, La Scala Philharmonic, Tonhalle Zurich, Orchestre Nationale de France, NHK Tokyo, DSO Berlin, Warsaw Philharmonic, Los Angeles Philharmonic, Philadelphia and Cleveland Orchestras, Vladimir Ashkenazy, Valery Gergiev, Kurt Sanderling, Esa-Pekka Salonen, Riccardo Chailly, Daniele Gatti, and Myung-Whun Chung, to name a few. He has performed and recorded the complete piano concertos by Beethoven, Tchaikovsky, Rachmaninov, and Bartók, and all piano sonatas by Prokofiev. Hailed as an unconventional virtuoso, during his three-decade-long career he developed a diverse and worked with composers Witold Lutosławski and Arvo Pärt. Jablonskis extensive discography includes several award-winning recordings.