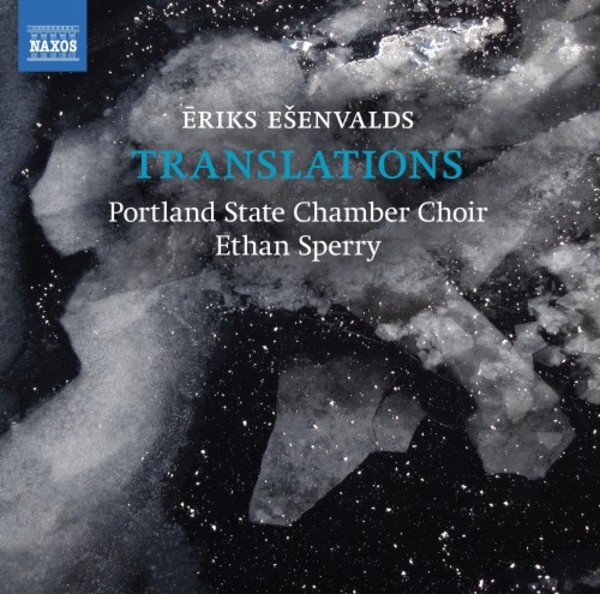 The multi-award-winning Latvian composer Ēriks Eenvalds 21st-century choral sound is both exquisite and angular, and in this album he explores ideas of translation, legend and the divine. With his expanded tonality and employment of shimmering singing handbells in Translation, and the angelic use of the viola and cello in In paradisum he creates music of ravishing refinement. In The Legend of the Walled-In Woman Eenvalds transcribes and employs an authentic Albanian folk song.

Since its founding in 1975, the Portland State Chamber Choir has performed and competed in venues across the US and around the world, earning over 30 medals and awards in international choir competitions, including being the only American choir to have won the Seghizzi International Competition for Choral Singing in Italy in 2013, and the Bali International Choir Festival in Indonesia in 2017. Their most recent album, The Doors of Heaven, featuring the music of Ēriks Eenvalds (8579008) debuted at number one on the Billboard Traditional Classical Chart (a first for a university choir), and was also a number one seller on Amazon and iTunes, with Apple Music adding the album to its The A-List: Classical playlist.

Ēriks Eenvalds is a composer with such acclaim that his music is among that most often performed throughout the world. He has won multiple awards, including the Latvian Grand Music Award (2005, 2007 and 2015), the International Rostrum of Composers First Prize (for The Legend of the Walled-In Woman, 2006), and New-Composer Discovery of the Philadelphia Inquirer (2010).

His works have been performed by the Boston Symphony Orchestra, the City of Birmingham Symphony Orchestra, the Utah Symphony, and the Britten Sinfonia. Eenvalds has written for The Kings Singers, Latvian Voices, Choir of Trinity College Cambridge, the Holst Singers, Imogen Heap, Polyphony and numerous choirs in the US. Eenvalds compositions appear on many recordings and, to date, eight are exclusively devoted to his choral music.

This new recording follows The Doors of Heaven (8579008) released in 2017, also performed by the Portland State Chamber Choir and Ethan Sperry. It was a Gramophone Choice, in which the magazine described it as a superb disc, containing impassioned performances, beautifully recorded. MusicWeb International added that this disc is a conspicuous success. (Recording of the Month)

Hailed by The Oregonian for providing the finest choral concerts in Portland in recent memory, Ethan Sperry is in his tenth year as director of choral activities at Portland State University, where he conducts the world-renowned Chamber Choir and leads undergraduate and graduate programmes in conducting. He is also the artistic director and conductor of the Oregon Repertory Singers, one of Americas most distinguished adult choruses.

For those seeking comfort and an escape from the manifold stresses and uncertainties currently facing mankind, there will be much in this new collection of choral music by Ēriks Eenvalds that will warm the soul and give solace while also providing a salutary reminder of the essential fragility of our existence.  A stunning, timely triumph,  full of ravishing, transformative and deeply touching music.  Malcolm Riley
Gramophone May 2020