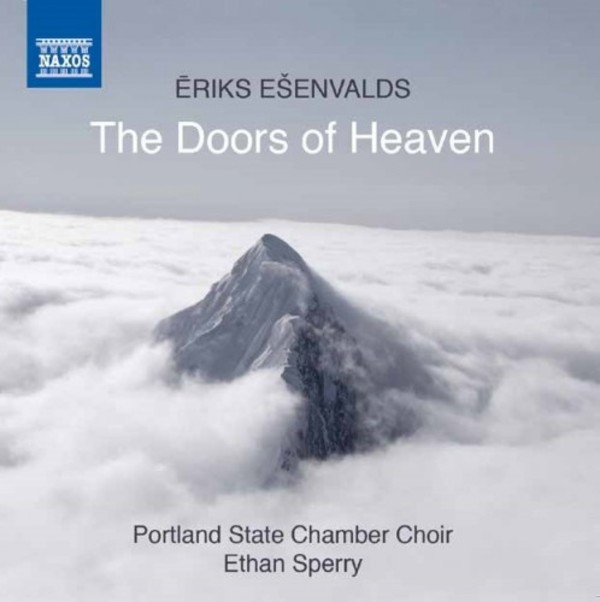 Esenvalds - The Doors of Heaven

The Latvian composer Ēriks Eenvalds (b. 1977) has rapidly become one of the worlds most performed choral composers. His ability to bring a dramatic text to life through textures that are lush yet permeated with a more stringent and angular aesthetic has ensured a steady stream of commissions from leading orchestras and choral forces. The four works here reflect an interest in the beauty of nature, religious faith and legend. The First Tears explores an Inuit story and employs subtle instrumental colouration from jaw harps and Native American flutes, whilst Passion and Resurrection is a profound and powerful exploration of Christs death and Resurrection.

Both Rivers of Light and Passion and Resurrection have been recorded on separate discs by Hyperion but the two other works in Naxoss disc do not seem to be available in any other recording.

Ēriks Eenvalds has won prestigious awards such as the International Rostrum of Composers First prize in 2006 and is a three-time winner of the Latvian Grand Music Award. He has been commissioned by the Boston Symphony, the City of Birmingham Symphony, Kings Singers and numerous choirs in the USA.

Hailed by The Oregonian for providing the finest choral concerts in Portland in recent memory, Ethan Sperry is Director of Choral Activities at Portland State University and Artistic Director and Conductor of Oregon Repertory Singers. Sperry began studying conducting at the age of eight, cello at the age of twelve, and singing at the age of eighteen. He earned a bachelors degree in Philosophy from Harvard College and Masters and Doctoral degrees in Choral Conducting from the University of Southern California. Ensembles under his direction have toured all over the world, and have performed at major venues in the United States including The Hollywood Bowl, The Kennedy Center and the United Nations.

This is the first Eenvalds disc to feature an American chorus.

One might have thought that trying to beat the Latvians at their own game was an impossible task, but this outstanding disc proves that composers such as Eenvalds speak very clearly across cultures. ... This is a superb disc, containing impassioned performances, beautifully recorded, and I very much hope that it will bring the work of the PSCC and Ethan Sperry before the wide international audience it deserves.  Ivan Moody
Gramophone November 2017