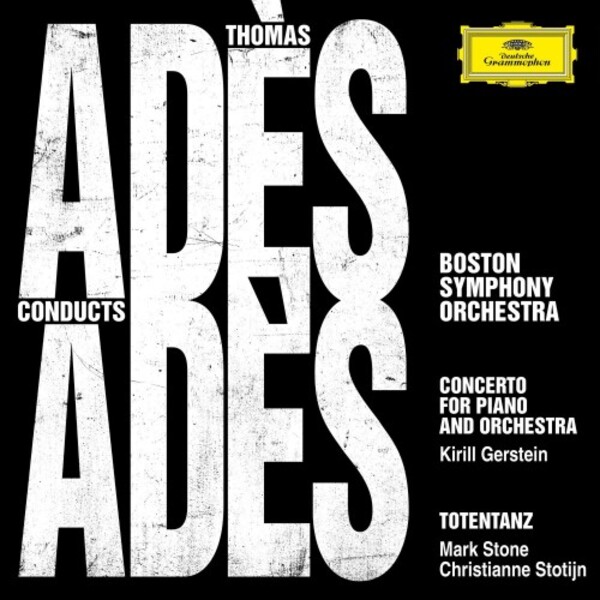 In March 2019, Thomas Adès, one of the most acclaimed and most frequently performed contemporary composers of our time, conducted the Boston Symphony Orchestra and Kirill Gerstein performing the world première of his Concerto for Piano and Orchestra. Comissioned by the BSO for Kirill Gerstein, the work already is becoming part of the concert repertoire worldwide.

This live recording of what turned out to be a ravishing celebration of contemporary music, receiving rapturous response from audience and critics alike, is paired on the album with Adèss 2013 work Totentanz.

Totentanz brings together baritone (Mark Stone) and mezzo-soprano (Christianne Stotijn) soloists with a (very) large orchestra, unfolding a dialogue between a charismatic and gleefully macabre Grim Reaper and the procession of his many victims, from Pope to Maiden and Child.

As one of the most consistently inventive figures on the contemporary music scene, British composer (and sometime conductor and pianist) Thomas Adès has gained a large following over the last two decades. His operas The Tempest and The Exterminating Angel were hits with critics and audiences alike, while his orchestral trilogy Asyla, Trevot and Polaris was also a notable success for the LSO Live label, conducted by the composer himself. Now Adès returns to the podium on disc, this time at the helm of the Boston Symphony Orchestra, with whom he has forged particularly close links. The recording, entitled simply Adès conducts Adès, pairs his vocal-orchestral cycle Totentanz (2013) with his more recent Piano Concerto (2018). The result, splendidly recorded by Deutsche Grammophon in Symphony Hall, Boston, gives a valuable snapshot of Adèss soundworld in recent years; it also happens to be a hugely enjoyable and rewarding listen.

When, some time in the future, the definitive history of Western art music is written, several chapters might be given over to the extraordinary resilience of the solo concerto as a fruitful form for composers from Vivaldi and Bach to Schoenberg and Berg, Birtwistle and Adès, and (hopefully) well beyond. The pitting of a solo instrument against ever-expanding orchestral forces seems to speak particularly powerful not just to composers and performers but to audiences as well, as if we all identified and sympathised with the soloists position, set against the bewildering multiplicity of forces in the modern world. In this particular case, the soloist is keyboard wizard Kirill Gerstein, who, having collaborated with Adès on other projects, asked him to write a proper piano concerto, to a BSO commission that was agreed virtually immediately. Adès readily obliged with a work in the customary three-movement form, which seems to throw together the worlds of Ravel, Prokofiev and Bartók into a fantastic mixing bowl, resulting in a work that was soon hailed as a modern classic.

The first movement bursts into life with a jazzy swing, carefully composed-in by Adès, the soloist part of the mix from the outset in writing that combines formidable technical demands with an equally impressive idiomaticity. The rhythmic drive of the main tune contrasts with a second theme of rhapsodic reflectiveness, punctuated by a spikier, more mechanical interjection, before expanding to shimmering cascades. With orchestral writing every bit as skilful as the solo part, and a remarkable formal clarity, this first movement sets up the concise, twenty-minute work as one of exceptional power. Solemn, imposing-voiced chords for woodwind and brass open the central slow movement (Andante gravemente) before the fragile entry of the soloist, supported discreetly by the soft tread of the orchestra; the solo interludes become more expansive, but always returning to this slow processional.

The finale, marked Allegro gioioso, starts off like a version of the works opening on speed, with wailing E flat clarinet giving it a twist of craziness, but soon mood of the funereal slow movement intrudes, taken to an intense climax before subsiding almost to nothing, a signal for the high-jinks of the movements opening to return, the writing ever more virtuosic with brilliant octave scales and a final closing flourish. It makes for a tremendously engaging work, accessible but also impressively virtuosic, and eclectic in the best sense. A modern classic? Time will tell, but if there are few pianists of Gersteins talents to meet its exacting demands, the gauntlet is there for them to take! Audiences are sure to love it.

The funereal undertow of the Piano Concerto forms a linking thread with the second work on this disc, Totentanz (Dance of Death or Danse macabre). It sets an anonymous medieval text that accompanied the famous Totentanz frieze in the Marienkirche, Lübeck, destroyed by allied bombing in World War II but preserved in prints and in black and white photographs. In it, the skeletal figure of Death leads the high and the low (in strictly descending order, from Pope and Emperor to peasant and babe in a cradle) on the dance we must all partake in at some point.

Adès has a baritone (here, the suitably grim-toned Mark Stone) as Death, alternating with a mezzo-soprano (Christianne Stotijn, who sang in the works first performances) who portrays all the other characters. The two-voice pairing with vast orchestra brings to mind Mahlers Das Lied von der Erde, but the continuous music, divided into clear sections as Death and his subjects (some resigned, others more resistant) alternate, is more reminiscent of the Second Viennese School, and Berg in particular. As befits the subject, this is music of uncompromising toughness, but Adès uses the orchestra to bring distinct character to each of the exchanges with, for example, a metallic clangour to the sound suggesting the knights armour.

Towards the end of this imposing, 35-minute work (Adèss longest single piece so far for the concert hall), the music softens, as first the welcoming peasant, then a gentle maiden and finally the helpless child seem to soften even Deaths heart. As the pace becomes slower, distinct tonal centres emerge, and theres an almost Straussian radiance to the final exchanges before the work ends with a Mahlerian growl from contrabassoons, piano and percussion. Adès skilfully weaves into the music the inevitability of the subject matter, and the result is a work of extraordinary power, even by his standards. Less immediately appealing than the concerto, it handsomely repays repeated listening, and this performance, with soloists and orchestra all in tremendous form, has the stamp of true greatness on it. An overwhelming end to an exceptionally rewarding release.

we are in the footsteps of Rachmaninov, from the opening pounce to the moments of repose and loneliness, the virtuosity, the whimsical hand separation, the composed rubato, the glitz and glamour, the sure-fire burning-out of the first movement (typical of Adès as well as of the Russian) and the slightly hollow hyperactivity of the last. Its not hard to hear how the work has already had 50 performances scheduled, as it demands that both soloist and orchestra thrill.  This proven masterpiece [Totentanz] has inexplicably had to wait until now for the release of its first recording and is another work in which the composer rotates a motif (albeit a narrative one) multiple times and proves the fertility of his mind and architectural prowess in so doing. Gerstein and the Boston Symphony pull the piano concerto off with flair but this performance is a cut above.  Andrew Mellor
Gramophone May 2020

... the orchestral song cycle Totentanz from 2013 ... seems more original than ever  a series of vivid, sometimes grotesque scenes, with baritone Mark Stone in superb form as Death and mezzo Christianne Stotijn portraying his successive victims.  Andrew Clements
The Guardian 27 February 2020