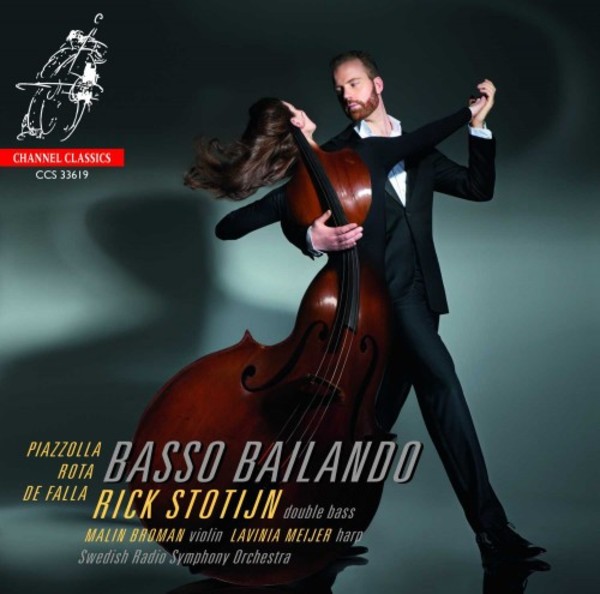 The title Basso Bailando - mixed Spanish and Italian for dancing bass - covers the pieces of this recording. Dutch Music Prize winner Rick Stotijn, who conquered the world with his debut recording of music by Bottesini, is surrounded by great musicians like violinist Malin Broman, harpist Lavinia Meijer and members of the Swedish Radio Symphony Orchestra.

Rick Stotijn received his first lessons at the age of eight, studied at the Conservatory in Amsterdam with his father Peter Stotijn where he graduated with the highest distinction. Later on he studied with Bozo Paradzik at the Hochschule in Freiburg. Rick won several first prizes at competitions such as the Princess Christina Competition, the Young Musical Talent Foundation and in 2013 the Netherlands Music Prize, which is the highest Dutch Music Award for young and talented musicians. Many solo appearances at home and abroad were soon to follow, including a Carte Blanche series in the small hall of the Concertgebouw Amsterdam.

Rick Stotijn performs regularly as soloist, he is very much in demand for chamber music concerts, and a regular guest at festivals. Rick is currently principal double bass player with the Swedish Radio Symphony Orchestra and the Rundfunk Sinfonie Orchester Berlin. As guest principal, Rick played regularly in the London Symphony Orchestra, Royal Concertgebouw Orchestra, Orchestra Mozart and the Mahler Chamber Orchestra. Rick is teacher at the Conservatory of Amsterdam. He performs on a Raffaele & Antonio Gagliano double bass, funded by the National Musical Instrument Foundation.