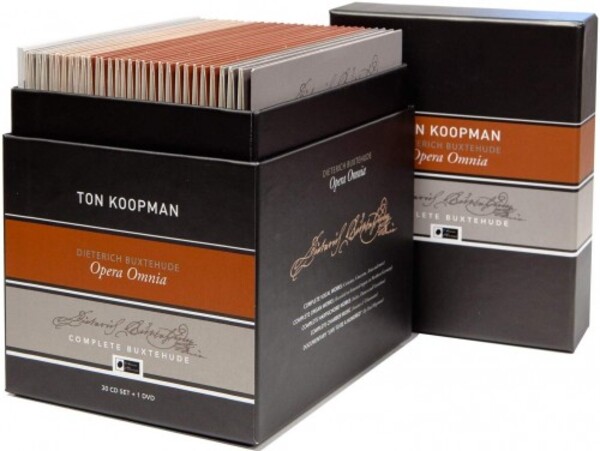 The world premiere edition of Dieterich Buxtehudes complete works performed by Ton Koopman, one of the worlds foremost Baroque music specialists, who planned and realised this great project with the support of his Amsterdam Baroque Choir and Orchestra and renowned vocal and instrumental soloists. This set represents a milestone in the Baroque music discography.

Ton Koopman is not only one of the great fathers of the Baroque-Renaissance revival in the 1970s, but a true pioneer of our time. After completing the Bach Cantatas survey, was he awarded the Bach Prize 2014 by the Royal Academy of Music. The prize is awarded to outstanding individuals in the performance and scholarship of Bachs music and none could be more worthy than Koopman, who has been noted as doing remarkable work promoting Bachs music in the last thirty or so years. Koopmans endless curiosity in music and performance research has this time turned his attention to a world premiere recording of Buxtehudes complete works.

Dieterich Buxtehude is considered by many to be the most important figure in German Baroque music, after Johann Sebastian Bach. The importance of such a composer is reiterated by the well-known anecdote, which tells the story of 20-year-old Bach walking four hundred kilometres to listen to Buxtehude playing in Lübeck in 1705.

In a world-first, Koopman has recorded Buxtehudes Opera Omnia including Vocal Works (Cantatas, Concertos and Arias), Organ and Harpsichord Works (played by Ton Koopman on historical instruments), Chamber Music (Sonatas and Trio Sonatas). This boxset collection is an incredible achievement in the Baroque discography, a milestone which will remain a reference for many years to come.

Both instrumental and vocal works have been studied and performed following the period instrument and vocal praxis. The individual releases, collected here for the first time, received much acclaim in the international press.
Contains a DVD with the documentary Live to be a Hundred, about the life of Ton Koopman.