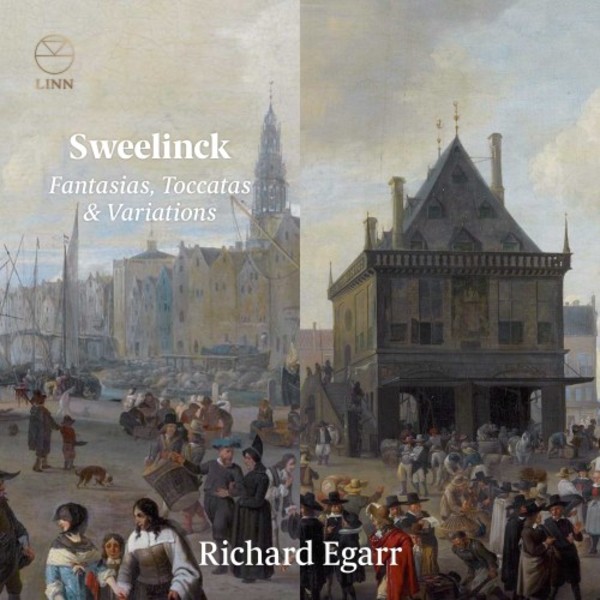 Following his acclaimed Linn debut, One Byrde in Hande, Richard Egarr turns to the music of Jan Pieterszoon Sweelinck for his new recording of fantasias, toccatas and variations. As well as being a notable composer Sweelinck was a skilled improviser and keyboard virtuoso whose knowledge of the stylistic innovations of his English contemporaries, such as Byrd and Morley, was evident in his work. Egarr performs on a harpsichord designed after Ruckers (1638); its strict ¼-comma meantone tuning highlights the amazing chromaticism present in Sweelincks music. This is particularly evident in the famous Fantasia Crommatica, a highly improvisatory, boundary-pushing work that showcases many of Sweelincks innovations in keyboard composition. Within his lifetime Sweelinck was most celebrated for his variations on the popular tune Mein junges Leben hat ein Endt; Egarr relishes the intricate counterpoint which builds from the simple theme into a masterpiece of inexhaustible invention and limitless variety. A selection of fantasias and toccatas complete the programme in which Egarrs passion for the harpsichord and Sweelincks music are enthusiastically conveyed.

Richard Egarr was appointed Music Director of the Academy of Ancient Music in 2006. He was Associate Artist of the Scottish Chamber Orchestra from 2011 to 2017 and has been appointed Principal Guest Conductor of the Residentie Orkest in The Hague from 2019. He is Artistic Partner of The Saint Paul Chamber Orchestra and Music Director Designate of Philharmonia Baroque Orchestra & Chorale. He will assume Music Directorship in 2021. As well as an accomplished conductor Egarr is also a brilliant harpsichordist, and equally skilled on the organ and fortepiano. He regularly plays solo at major venues such as Wigmore Hall, London, and Carnegie Hall, New York, and has recorded many albums for Harmonia Mundi and Linn.

The Sweelinck pieces, a toccata and the Fantasia Crommatica, were luminous, their wandering into distant keys tastefully pointed up, but unmistakable. - Washington Post

In addition to Sweelincks queasy downward-slithering tunes, there were acerbic harmonic juxtapositions and clashesMr. Egarrs playing showing a cleanliness, refinement and style all too rare among harpsichordists. - New York Times

There is vibrancy and excitement in these committed performances
MusicWeb International