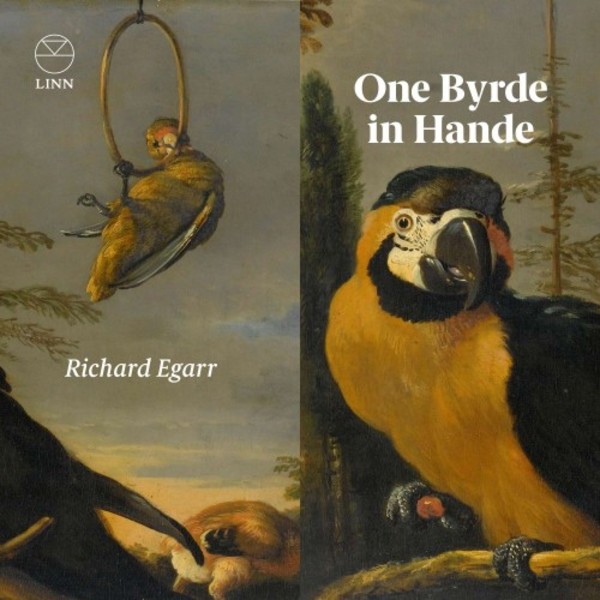 One Byrde in Hande

Richard Egarrs impressive career, both as a solo keyboardist and conductor (notably with the Academy of Ancient Music), has cemented his reputation as one of the UKs most compelling musicians. In his debut solo recording for Linn, Egarr charts the extraordinary breadth of invention at play in works by William Byrd.

One of English musics most influential figures, Byrds innovative style is evident throughout this well-chosen programme of preludes, grounds and fantasies. The Fantasia in A minor, MB13 demonstrates the unlimited scope of Byrds imagination; intricate rhythms, surprising modulations and changing textures precede a finale requiring a previously unequalled level of dexterous virtuosity. Egarr similarly relishes the technical demands of Byrds descriptive masterpiece, The bells. This incredible composition begins with a single toll before developing into an elaborate and thrillingly complex showpiece of pealing bells. Egarrs elegant phrasing, infectious enthusiasm and rich embellishments result in insightful performances.

Richard Egarr has been Music Director of the Academy of Ancient Music since 2006. He was Associate Artist of the Scottish Chamber Orchestra from 2011 to 2017 and has been appointed Principal Guest Conductor of the Residentie Orkest in The Hague from 2019. As well as an accomplished conductor Egarr is also a brilliant harpsichordist, and equally skilled on the organ and fortepiano. He regularly plays solo at major venues such as Wigmore Hall, London, and Carnegie Hall, New York, and has recorded many albums for Harmonia Mundi, notably of Bach, Couperin, Purcell and Mozart. Egarr was an organ scholar at Clare College Cambridge, and later studied with Gustav and Marie Leonhardt. He teaches at the Amsterdam Conservatoire and is Visiting Artist at the Juilliard School in New York.

Egarr had greater success in speaking to 21st-century ears in other works. Byrd's "The bells" was exceptional proof that not all early keyboard music consists of abstract fugues. - The Herald

The music exploded with character under Egarrs hands His playing was fluid and assured. - New York Classical Review

the sound of Byrds Prelude and Fantasia was delicate and gentle, but also brightly lucid in how its detail could be heard. - The Scotsman

Some might think Byrd's keyboard music to be all stately Elizabethan pavanes and galliards. Not so...it's breathtakingly inventive music, and played accordingly.
The Sunday Times

A joyous upwards flourish opens Richard Egarrs Byrd recital, added by him to the beginning of a 50-second Prelude for which the composer has already written a flurry of fast notes as an ending. But if thats the kind of thing thats typical of Egarrs natural keyboard exuberance, its surely also a sign of the particular excitement he feels when Byrds music is under his fingers. ... An outstanding celebration of Byrd as one of the first keyboard greats.  Lindsay Kemp
Gramophone August 2018

Purcell - The Cares of Lovers