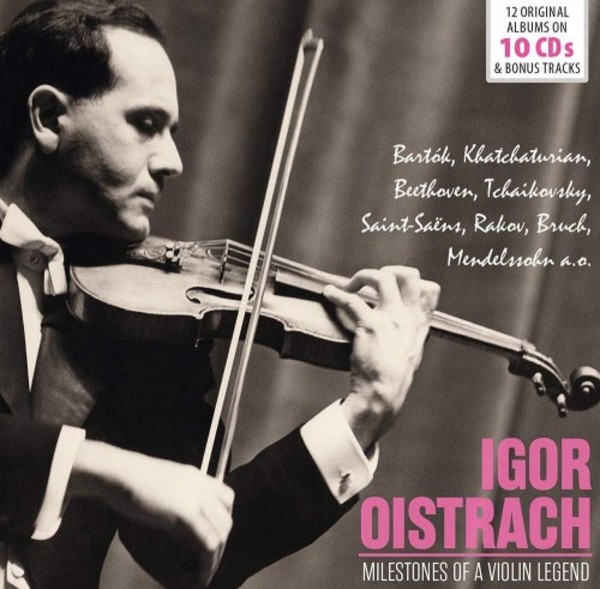 Song-Poem (in honour of the Ashugs) for violin and piano
Violin Concerto in D minor, op.46

Grave (in the style of WF Bach)

Song-Poem (in honour of the Ashugs) for violin and piano
Violin Concerto in D minor, op.46

Grave (in the style of WF Bach)

You cannot be too cautious when choosing your father, otherwise youll have his big name mentioned to you almost daily as a junior, joked German newspaper Die Welt in a tribute to violinist Igor Oistrakh. Although he was certainly influenced musically by his legendary father David Oistrakh early on, Igor developed his own handwriting as a young musician  as brilliant as he was passionate and virtuoso.

The cultural functionaries of the Soviet Union allowed the young musician to appear in western countries even before his father enjoyed this privilege. Thus young Oistrakh  who was already enthusiastically celebrated in the eastern bloc countries  started a remarkable international career in the 1950s. This box-set with 12 original albums from the years 1954 to 1962 (plus bonus material) contains important recordings of his concert repertoire from his best years with works by Bartók, Khachaturian, Beethoven, Tchaikovsky, Saint-Saëns, Rakov, Bruch, Mendelssohn and others. It not only shows a highly interesting soloist and chamber musician, but also honors this unique stroke of luck in the history of violin playing, the duo David and Igor Oistrakh which was celebrated for a quarter-century, with some of their famous recordings.
Vivaldis Double Concerto is included here as are Wieniawskis Caprices, Sonatas by Benda and Bach. For direct comparison, check out the the two Beethoven Romances on offer here, recorded by the father in 1961 and five years earlier by the son. Franz Konwitschny, Eugene Goossens, Gennady Rozhdestvensky, the Royal Philharmonic Orchestra, the Leipzig Gewandhaus Orchestra, the Staatskapelle Berlin and many more are also featured on these recordings.