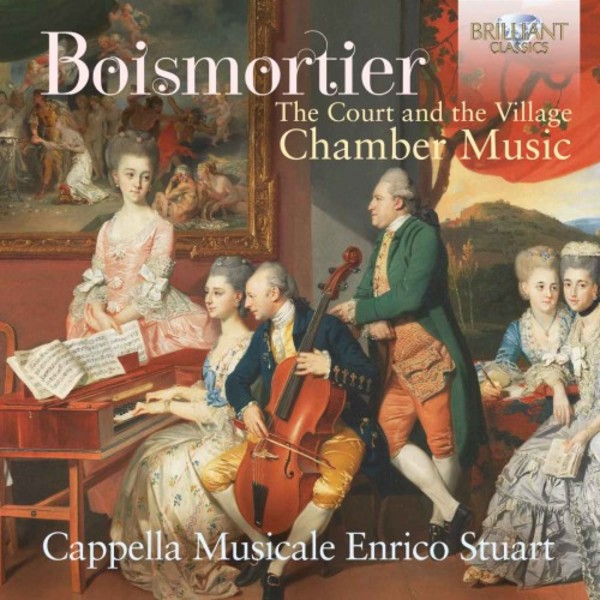 Boismortier - The Court and the Village: Chamber Music

Boismortier (16891755) was a highly successful composer, active at the same time as Jean-Louis Rameau (16831764) during the Rococo era and the reign of Louis XV. He wrote over 100 compositions during his lifetime, and their characteristic lightness and grace made him immensely popular with Parisian sophisticates of his day. This set opens with an upbeat and charming trio sonata (op.37 no.3) in which the recorder flits between playful and sombre melody lines with ensemble accompaniment. Boismortier is most known for his compositions for the recorder and the flute, but he composed for a wide variety of instruments. For example, this release includes two suite movements from his Pièces de clavecin, op.59, for solo harpsichord. La Puce (The Flea) has a humorous staccato theme which jumps along the keyboard before evolving into a satisfying harmonic progression.

Boismortiers music is a blend of Italian and French styles, and he was the first French composer to employ the Italian concerto style, of which this set contains two examples. An entrepreneur in the modern sense, Boismortier had no patrons and published his own music, a rare feat for the time. The composer earned enough from sales to be self-sufficient, meaning he could freely pursue the latest musical trends without having to conform to the tastes of commissioning aristocrats. Boismortier studied with the accomplished motetist Joseph Valette de Montigny (16651738), and he lived in Perpignan for several years working as a receiver for the Royal Tobacco Control before making a name for himself as a composer. Word of his sublime and effortless music soon reached Paris, and not long after, in 1724, he moved to the French capital, where he continued composing until his death. The set closes with rousing folk music in the fourth village dance suite from his 4 Balets de village en trio, op.52. The rustic melodies contrast with an arrangement typically favoured by the elites: Boismortier employs flutes, recorders, violin and a steady basso continuo. This is perhaps a reflection on dual identity, by a composer who climbed the economic ladder from a humble upbringing in Thionville to join the ranks of Parisian high society.

Capella Musicale Enrico Stuart has toured internationally and received much critical acclaim along the way. This album is a rare find, and Boismortiers refined and elegant music will delight any listener.