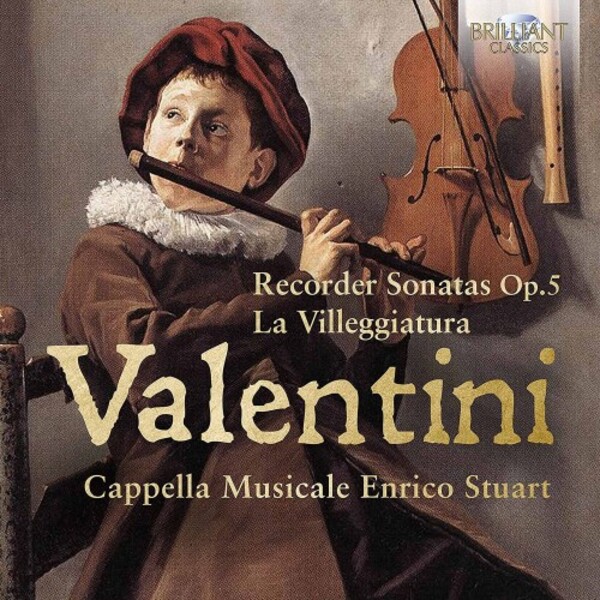 Roberto Valentini (16711747) was born in Leicester and most likely remained in England until his 21st birthday, when he emigrated to Italy, settling in Rome. A multi-instrumentalist, Valentini began his career in the papal city as a violinist, cellist and oboist, but is best known as a composer for the recorder, an instrument at which he excelled as a performer.

After an initial and almost total adherence to the Corellian style, he gradually began to embrace the sonata collections being published in northern Europe and the stylistic features of a nascent galant style. His extant musical output consists solely of instrumental music, primarily dedicated to the recorder.

Vaentini was also active as a recorder pedagogue, and he capitalised on the popularity the instrument was enjoying in his day among amateur musicians. As an expatriate who maintained close contact with his homeland, he may have even imported and marketed English recorders in his adopted country. There were two great makers active in London at the time  Peter Bressan and Thomas Stanesby  so copies of their instruments were selected for use on this recording.

The 12 Recorder Sonatas, op.5, were published in London between 1715 and 1720, in a style perfectly idiomatic for the recorder and aimed at the vast public of amateurs, taking Italian sonatas for violin and bass, particularly Corellis Opus 5, as a model. The first three of Valentinis sonatas exhibit the solemn Sonata da Chiesa style, with the later sonatas containing more graceful, dance-like movements typical of the French-derived Pièces de Caractère.

The 6 Sonatas for 2 Flutes La Villeggiatura appear among the five handwritten volumes of recorder music dating to the first half of the 18th century housed in the Sezione Musicale of the Biblioteca Palatina in Parma. The sonatas possess traits indicating a likely publication date of 1730, and the collection was popular, thanks to Valentinis skill at combining brilliant, pleasant writing with relative ease of performance in fast tempos  satisfying for both performers and audience  and delightful, expressive melody with many written-out suggestions for diminution of cadences in the slow sections.

Recorded in October of 2019 in Monte Compatri (Rome), Italy

Boismortier - The Court and the Village: Chamber Music

Mandolin in the capitals of Europe