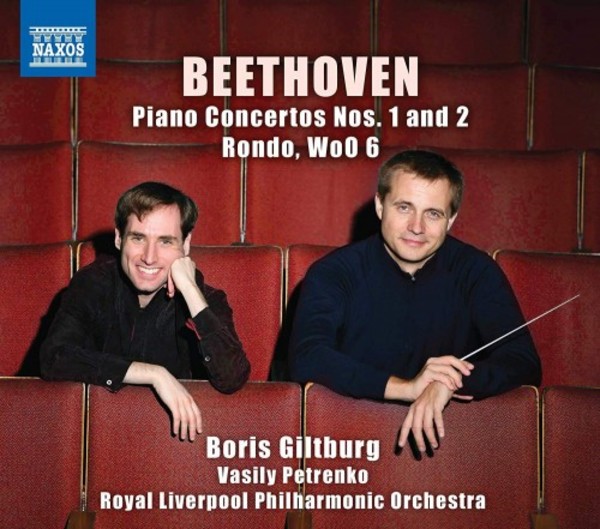 Beethovens first two piano concertos share an abundance of lyric and virtuosic qualities. Concerto no.1 in C major is expansive and richly orchestrated with a sublime slow movement that is tender and ardent, and a finale full of inventive humour. Concerto no.2 in B flat major marries energy with elegance, reserving poetic breadth for its slow movement and quirky wit for the finale. Also included is the jovial Rondo, WoO6, which Beethoven originally intended to be the finale of Concerto no.2.

The young Moscow-born Israeli pianist Boris Giltburg is lauded across the globe as a deeply sensitive, insightful and compelling musician. He has appeared with many leading orchestras such as the Philharmonia Orchestra, London Philharmonic Orchestra, Israel Philharmonic, NHK Symphony, Oslo Philharmonic and the Baltimore Symphony. He made his BBC Proms debut in 2010, his Australian debut in 2017, and has frequently toured South America, China and Germany. He has played recitals in leading venues such as the Hamburg Elbphilharmonie, Carnegie Hall, Amsterdam Concertgebouw, Southbank Centre in London, Bozar in Brussels and the Louvre. In 2018 he won Best Soloist Recording (20th/21st century) at the inaugural Opus Klassik Awards for his recording of Rachmaninovs Second Piano Concerto (8573629).

Boris Giltburg, who took first prize at the 2013 Queen Elisabeth Competition, is one of todays most exciting young pianists, lauded for his massive and engulfing technique, supporting interpretations that glow with warmth and poetic commitment (Gramophone). His recording of Liszts Transcendental Etudes (8573981) has recently been released: a Liszt disc of the most compelling brilliance. It would be hard to imagine a more complete translation of virtuosity into poetry, the fiendish difficulties seized on as pure expressive bonus, wrote The Sunday Times (London).

Giltburg has achieved international fame as a Rachmaninov interpreter on Naxos  his Études-tableaux, op.39 (8573469) was a Gramophone Recording of the Month, American Record Guide Critics Choice and BBC Music Magazine Instrumental Choice. Gramophone commented that he possesses immaculate technique and motivated by a deep and abiding love for one of the 20th centurys greatest composer-pianists.

Giltburgs previous release of Shostakovichs Piano Concertos nos. 1 and 2, and his piano arrangement of the Eighth String Quartet (8573666) with the Royal Liverpool Philharmonic Orchestra and Vasily Petrenko also received several accolades  Diapason dOr, BBC Music Magazine Concerto Choice, MusicWeb International Recording of the Month, and a Supersonic rating from Pizzicato. ClassicsToday.com also awarded it a perfect 10/10 score: These are big, bold, in-your-face performances that find a wider range of expression in both works than you might have believed possible.

The Royal Liverpool Philharmonic Orchestra is one of the nominees in the 2019 Gramophone Orchestra of the Year. With Petrenko, the orchestra is widely acclaimed for the outstanding recordings of the complete symphonies by Dmitri Shostakovich on Naxos (8501111).