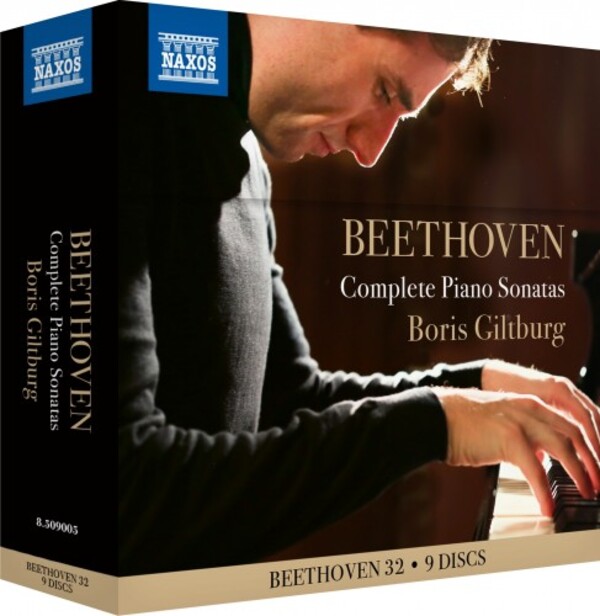 Boris Giltburg is lauded worldwide as a deeply sensitive, insightful and compelling interpreter, with critics praising his impassioned approach to performance. This project to record all of Beethovens 32 piano sonatas is a personal exploration for Giltburg, driven by curiosity and his profound respect for the composer. These exceptional performances received widespread critical acclaim upon their original digital release and this premiere CD release includes extended personal and informative booklet notes written by the pianist. From the vivid energy of the early sonatas, through the dark passions and enchanted lyricism of Beethovens middle period, to the awe-inspiring transcendence of the final sonatas  this cycle runs the full gamut of human emotion.

These recordings have previously been available as digital downloads. With the acclaim given to these recordings in their digital form, this 9-disc boxed set has of course been highly anticipated.

The presentation with superbly readable extended personal and informative booklet notes written by Boris Giltburg means that this production can stand comparison with any of the numerous recordings of Beethovens 32 piano sonatas available.

The first three volumes (97030709) were warmly praised by Gramophone: Textures are consistently transparent and the musical discourse unfolds unambiguously, nowhere more powerfully than in the furious Prestissimo finale of the F minor Sonata. BBC Music Magazine added to Vol.2 (970308): [Giltburg brings] us closer to the spontaneous feel of a live performance on this form Naxoss cycle looks set to be something special.

The final volume with Sonatas nos. 3032 (970315) was much admired in Pizzicato: One never has the impression that Giltburgs playing is researched or even mannered, no, he impresses as a clever, spontaneous and honest narrator at the piano.

Pianist Boris Giltburg is lauded across the globe as a deeply sensitive, insightful and compelling interpreter, with critics praising his impassioned, narrative-driven approach to performance. At home in repertoire ranging from Beethoven to Shostakovich, in recent years he has been increasingly recognised as a leading interpreter of Rachmaninov. He is recording the complete Beethoven piano concertos for Naxos with the Royal Liverpool Philharmonic (RLPO) and Vasily Petrenko. In 2018 he won Best Soloist Recording (20th/21st century) at the inaugural Opus Klassik Awards for his Naxos recording of Rachmaninovs Piano Concerto no.2 with the Royal Scottish National Orchestra and Carlos Miguel Prieto, coupled with the Études-Tableaux. He won a Diapason dOr for his first concerto recording, the Shostakovich concertos with Petrenko and the RLPO, coupled with his own arrangement of Shostakovichs String Quartet no.8; and his Liszt, Schumann, Beethoven solo discs on Naxos have been similarly well received.

He has a close relationship with the Pavel Haas Quartet, winning a Gramophone Award in 2018 for their Dvořák Piano Quintet on the Supraphon label.