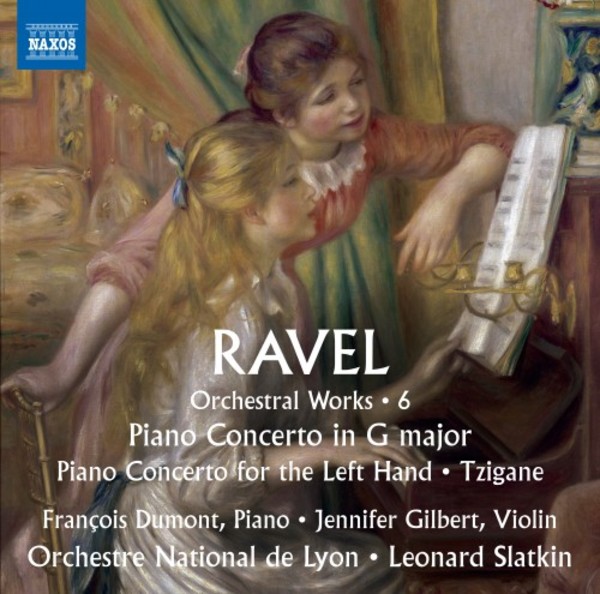 Composed between 1929 and 1931, Ravels two piano concertos reflect his enthusiasm for jazz, though one that was thoroughly absorbed into his own idiom. The Concerto in G major, originally conceived as a Basque rhapsody, is lightly scored but sports a vivacious percussion section, galvanising motor rhythms and a slow movement of astonishing beauty. The Concerto for the Left Hand, commissioned by Paul Wittgenstein who had lost his right arm in the First World War, is a single movement tour de force, as is Tzigane, a gypsy violin showpiece of dazzling virtuosity.

The sixth installment of Leonard Slatkins ongoing series of Ravels orchestral works, with the Orchestre National de Lyon, features the composers works for solo instrument and orchestra. The series has been highly acclaimed, including an ICMA nomination for Vol.3 (Orchestrations) on 8573124.

Vol.5 (8573448) features the world premiere recording of Ravels incidental music for Antar (after works by Rimsky-Korsakov), in which ClassicsToday.com wrote: Slatkins conducting is excellent, as it almost always is when hes interpreting Russian music, and the sonics are very good. The full ballet score of Daphnis et Chloé is recorded in Vol.4 (8573545), and was an AllMusic.com Editors Choice: spectacular performances.

A prize-winner of the International Chopin Piano Competition and the Queen Elisabeth Competition, François Dumont has appeared as soloist with major orchestras in Russia, USA, Colombia and Japan among others, under the baton or renowned conductors such as Antoni Wit, Leonard Slatkin and François-Xavier Roth. He was recently featured in a recording of Andre Jolivets flute works, with flautist Hélène Boulègue (8573885).

Internationally acclaimed conductor Leonard Slatkin is music director laureate of the Detroit Symphony Orchestra (DSO) and directeur musical honoraire of the Orchestre National de Lyon (ONL). He maintains a rigorous schedule of guest conducting throughout the world and is active as a composer, author, and educator. Slatkin has received six Grammy Awards and 33 nominations. His recent Naxos recordings include works by Saint-Saëns, Ravel and Berlioz (with the ONL), and music by Copland, Rachmaninov, Borzova, McTee, and John Williams (with the DSO). A recipient of the prestigious National Medal of Arts, Slatkin also holds the rank of Chevalier in the French Legion of Honour. His second book, Leading Tones: Reflections on Music, Musicians, and the Music Industry, was published by Amadeus Press in 2017.