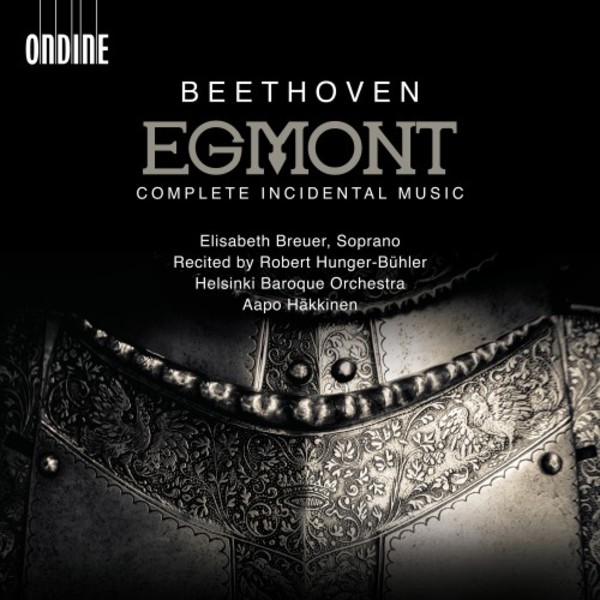 Beethoven started to write the incidental music to Goethes Egmont in the autumn of 1809. The recent experience of Napoleons siege of Vienna, the Spanish uprising against the French, and the ubiquitous awareness of the hand of the oppressor inspired him to write music in which the drama develops into the musical vision of the Wars of Liberation. It was a commission from the management of the Imperial Court Theatre in Vienna, which in October 1809, oppressed by Napoleon on all sides, had turned again to Egmont, with a view to putting on a new production. Beethoven was tasked with providing the essential and indispensable music, which was however played only from the fourth performance of the new production in June 1810. Beethoven had recently become an ardent reader and admirer of Goethe. He had set Mignons song Nur wer die Sehnsucht kennt four times in 1808 alone, and this had started an intense preoccupation with songs to Goethe texts. In a letter to Bettina von Arnim in February 1811 Beethoven writes: My most sincere admiration  for Goethe  I am about to write to him myself about Egmont, for which I have written the music, which I did out of sheer love for his poetry . What distinguishes Beethovens Egmont are great dramatic emotion of style, tightly unified musical ideas, and an absolute determination to create a sense of the triumph of freedom as the Utopian dream of the whole of mankind. The overture, the only one of the ten numbers to be heard regularly today in the concert-hall, draws all these intentions together in concentrated form. Its meaning is revealed only in context, together with the interludes and the final musical episodes.

Beethovens Egmont Overture has long been among his most popular orchestral works, a powerful piece with a serious, weighty introduction, followed by a grippingly intense Allegro and rounded off with a marvellously uplifting coda complete with martial trumpet calls. Yet the rest of the incidental music he wrote in 1810 for a new Viennese production of Goethes 1788 revolution-infused drama has for the most part been left in the shadows. For many years the only available recording was the one conducted by George Szell, with the marvellous Pilar Lorengar as the heroine Clärchen in the two vocal numbers. Its still worth seeking out, but recent years have happily seen the emergence of new accounts of the complete incidental music, many with accompanying narration to summarise the action of the drama. The latest is a splendidly compelling performance, taken from live concerts, by the Helsinki Baroque Orchestra (playing on Classical-period instruments) under Aapo Häkkinen.

The main attraction of this new account is its combination of stylishness, commitment, thoughtfulness and polish, which is most evident when set by the side of the recent, often rather breathless, and occasionally rough-round-the-edges reading from Martin Haselböck and the Orchester Wiener Akademie. The Helsinki performance may have less of the whiff of the theatre about it (though the first violins are placed on the right of the sound picture, as they often are in theatre pits), but it is a deeply-considered reading, with lively but not hectic speeds where needed, that stands up extremely well to repeated listening.

In the Overture itself, Häkkinen takes some liberties with agogic accents on upbeats, and introduces articulation and dynamics not always specified in the score, but most are well within the boundaries of period style and all are done with good reason and to thrilling effect. Its a shame that the closing trumpet calls dont cut through quite as they should, as Häkkinen has them dip-and-swell with the rest of the orchestra, but in the context of the performance as a whole this is a minor misstep. The rest of the music, comprising four entractes, two songs for Clärchen plus music to accompany her death, a melodrama showing Egmont before his execution, and the final Victory Symphony (in effect the closing section of the Overture) is all marvellously paced and shaped, the frisson of a live performance combined with playing of real polish.

The role of Clärchen is taken with distinction by soprano Elisabeth Breuer, youthful sounding, with tone as clear as a bell, hugely involving and also convincing in a part that was originally written for an actress (Antonie Adamberger, daughter of the first Belmonte in Mozarts Die Entführung aus dem Serail), not an operatic soprano. Her first song, Die Trommel gerühret, is especially successful, with Häkkinen and his orchestra delivering real panache and swagger in the major-key sections, while the second, Freudvoll und leidvoll, is most affecting.

In performances of the complete incidental music, much hinges on the delivery of the accompanying commentary. Here it is given with a real sense of urgency and involvement by the veteran German actor Robert Hunger-Bühler. Of special interest is the text itself, which is the earliest declamatory condensation of Goethes drama made by the poet Friedrich Mosengeil in 1821, rather than Franz Grillparzers more commonly heard later effort. Mosengeils versified summary may have its longueurs, but they are less noticeable when delivered with such momentum as they are here. Where declamation occasionally interweaves with the music itself, it is done with particular deftness, and Hunger-Bühlers enunciation is so clear that no non-native speaker will have trouble following the full text and translation in the accompanying booklet. The entractes, Clärchens quietly moving death scene and the final melodrama are all performed with such commitment that the abundant stylistic and thematic parallels with Fidelio are readily apparent.

For its Viennese audiences in 1810, Goethes drama of the historical Count Egmont acting as catalyst to a revolution that threw off the shackles of the Netherlands Habsburg oppressors will have had particular resonance. In the wake of Napoleon Bonapartes occupation of the city and his subsequent stranglehold on life in the Austrian territories, life in Vienna stifled. It also no doubt appealed to Beethovens own Low Countries roots, and he flung himself into composition of his Egmont music at a time when, for personal reasons as much as anything, he desperately needed a cause. The real strength of this new recording is that the listener gets a sense of all of this and more, because it raises some of Beethovens most compelling late-middle-period music to the level it deserves. For anyone looking for a good single-disc Egmont in excellent modern sound, this is now a clear top contender.