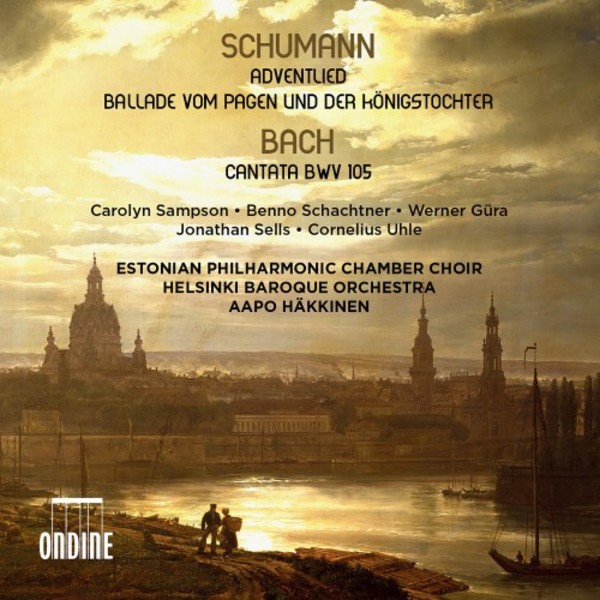 This recording includes the world première recording of Schumanns 17-minute Adventlied, op.71, for soloists, chorus and orchestra, four choral ballades based on texts by Emanuel Geibel, and Schumanns version of Bachs Cantata BWV 105.

Robert Schumann wrote in 1850: 'Keep in mind that there are also singers, and that the highest in musical expression is achieved through the chorus and orchestra'. This illustrates well the composers desire to write large works for this medium in an attempt to create a new genre for the concert hall. Today, they still constitute the least explored area of his output. The elevated style he was aspiring to (both in the text and the music) was unheard-of outside the realm of church music. In fact, whether for the church, opera, or the concert hall, Schumann was looking for a sanctified realm, a Goethe-inspired meeting ground for art and religion.

Adventlied, op.71, was written in November 1848 to a text from Friedrich Rückerts Pantheon. The sense of urgent need and chromatic writing alternate with lyrical sections and quasi-Handelian grand climaxes in praise of universal brotherhood, featuring the transformed opening theme from time to time throughout the work. Schumann studied intensively approximately 500 works by Bach, including numerous still unpublished cantatas, and took them up again and again in order to 'daily confess before this lofty man, and strive to purify and strengthen myself through him'. He conducted in Dresden in February-May 1849 the Adventlied and in July 1849 Bachs dramatic cantata Herr, gehe nicht ins Gericht, BWV 105, and in Düsseldorf in October 1850 the Adventlied and, in the secular sphere, in November-December 1852 and again in March 1853 the large choral-orchestral ballade Vom Pagen und der Königstochter, op.140, on texts by Emanuel Geibel. The works form bears a close resemblance to symphony. The four ballades are the unquestionable highpoint of Schumanns modern, pervasively noble epic drama and peculiar way of storytelling.

Estonian Philharmonic Chamber Choir (EPCC) is one of the best-known Estonian music groups in the world. The repertoire of the choir extends from baroque to contemporary music, focusing on the work of Estonian composers. EPCC has cooperated with many outstanding conductors and orchestras, and has been a welcome guest at numerous music festivals and venues all over the world, including the BBC Proms and the Lincoln Center in New York, among others. The choirs recordings have won several awards.

For twenty years, Helsinki Baroque Orchestras performances and recordings have been captivating audiences with a potent combination of emotional eloquence and infectious vitality. Their programmes frequently include first modern performances of unpublished or reconstructed masterpieces, and also shed unexpected and often provocative new light on more familiar works. Their music-making has contributed to the ensembles reputation as a major exponent of Baltic and German Baroque music. Helsinki Baroques sound has enthralled listeners from the Cologne Philharmonie to Tokyos Suntory Hall and the Amsterdam Concertgebouw, and at major festivals such as Bergen, Bremen, Rheingau, and Jerusalem.

Aapo Häkkinen is known as a distinguished chamber musician and director. Häkkinen has collaborated with several well-known artists around the world and programmed opera performances. Besides the harpsichord, he regularly performs on the organ, on the clavichord, and on the fortepiano. He has commissioned, given premières, and recorded music by various composers. He teaches at the Sibelius Academy and at international masterclasses (Tokyo University of Arts, Universidad Nacional de México, Kulturstiftung Marienmünster, Bratislava, Sofia, Tallinn, Tampere, Turku, Zagreb Academies of Music). He is Artistic Director of the Helsinki Baroque Orchestra and of the Helsinki Musiikkitalo Early Music Series as well as the Janakkala Baroque Festival.