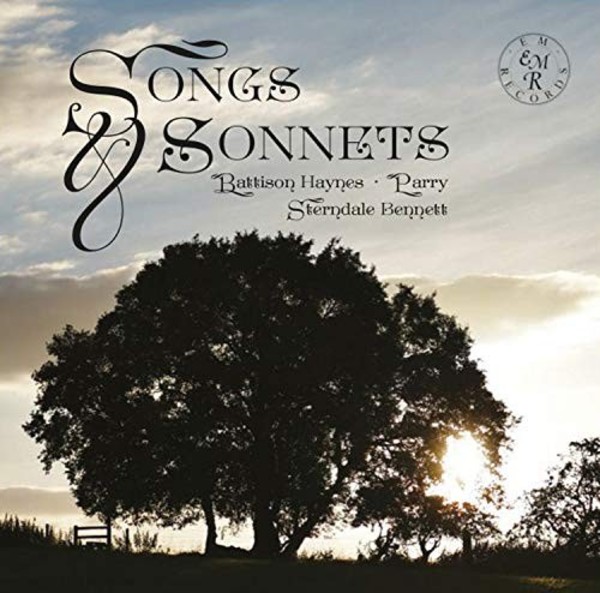 Songs & Sonnets: Songs from the Reign of Queen Victoria

Vivid performances of songs and sonnets by Hubert Parry, Sterndale Bennett and Walter Battison Haynes, including world premiere recordings by the latter two, in both English and German from the reign of Queen Victoria, are given here by mezzo-soprano Belinda Williams and tenor Mark Wilde, with accompaniment by David Owen Norris.

For more than a century, vocal music was sung in translation as a matter of routine. Constant Lamberts Rio Grande has a splendid German translation of Sacheverell Sitwell, and Benjamin Brittens On this island an even better French translation of W.H. Auden. The man who started all this intelligibility was William Sterndale Bennett, who in the 1840s and 50s published in Leipzig and London 12 songs with English & German words, some of them composed originally in German. Sterndale Bennetts lyrical gift makes them a delicious addition to the song repertoire. The CD presents all his songs. EM Records have added Sir Hubert Parrys unique settings of Shakespeare Sonnets, which have two completely different vocal lines for Shakespeares words and Bodenstedts translation; and four songs by Walter Battison Haynes, Malverns answer to Elgar. English and German words for all the songs are given in the CD booklet, and several of them are performed in both languages.

London-born mezzo-soprano Belinda Williams made her Wigmore Hall debut with a programme of English and Russian song at the age of 25, whilst still a student on the Royal Academy of Music Opera Course. Belinda made her German debut as Dorabella at the Staatstheater Kassel in 2012, after which she was awarded the Nachwuchsforderpreis (Most Promising Newcomer).