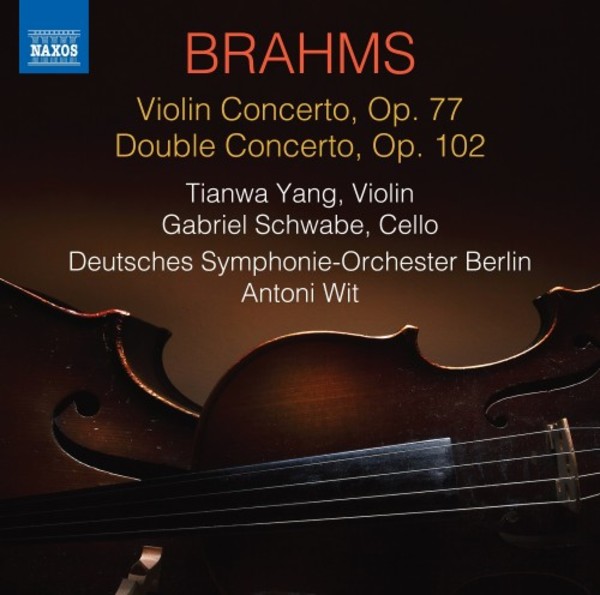 Brahmss string concertos are indissolubly linked with the musicians for whom the works were written. He wrote the Violin Concerto for Joseph Joachim and in it he combined what a contemporary critic termed the great and serious with songful lyricism, melodic beauty, and a fiery Hungarian finale. To mend a breach with the violinist, Brahms later composed a concerto with the unusual combination of violin and cello, the latter played at the premiere by Joachims colleague Robert Hausmann. Neither instrument predominates in a work of reconciliation that perfectly embodies both drama and reflection.

Tianwa Yangs most recent recording project involved the works for violin and orchestra by Wolfgang Rihm. The first volume, released in November 2018, received 5 stars from Pizzicato (8573812): Tianwa Wang shows her outstanding technical abilities and strong interpretative solutions for this modern repertoire. Vol.2 was released in March 2019 (8573667).

Recipient of the ECHO Klassik 2015 Best Instrumentalist (violin) and Best Up-and-Coming Artist 2014 Awards for her Ysaÿes Sonatas for Solo Violin (8572995) and Mendelssohns two Violin Concertos (8572662), Tianwa Yang has also recorded Sarasates complete music for violin (8504046 and 8504054), followed by Rihms Complete Works for Violin and Piano (8572730), Castelnuovo-Tedescos Violin Concertos Nos. 1 and 2 (8573135), and Lalos Symphonie espagnole with Juan Manéns Concierto español (8573067).
Gabriel Schwabe has established himself among the leading cellists of his generation. As a soloist, he has worked with major orchestras in Europe, with conductors including Marek Janowski, Cornelius Meister, Marc Soustrot and Lars Vogt, among others. In 2010 Gabriel Schwabe gave his recital debut at Wigmore Hall in London. He is a regular guest at festivals such as the Jerusalem Chamber Music Festival, the Kronberg Festival and the Amsterdam Biennale.
Schwabes debut Naxos recording features Brahmss cello sonatas and song transcriptions released in 2015, with pianist Nicholas Rimmer (8573489). Of it Fanfare wrote: Schwabe plays with a beautifully smooth and sweet tone. In addition, his intonation and finger-to-bow coordination are spot-on.

For more than 70 years the Deutsches Symphonie-Orchester Berlin (DSO Berlin) has distinguished itself as one of Germanys leading orchestras. The ensemble is unique in its variety of work, and its particular emphasis on contemporary repertoire. Its discography features many award-winning releases, including the 2011 Grammy Award for Best Opera Recording for the production of Kaija Saariahos LAmour de loin.
Antoni Wit is one of the most highly regarded Polish conductors and a champion of Polish music, and has produced over 200 recordings. He received the Record Academy Award 2005 of Japanese music magazine Record Geijutsu for Pendereckis Polish Requiem (Naxos), and four Fryderyk Awards of the Polish Phonographic Academy. In 2012 he received a Grammy Award for Pendereckis Fonogrammi, Horn Concerto and Partita (8572482).