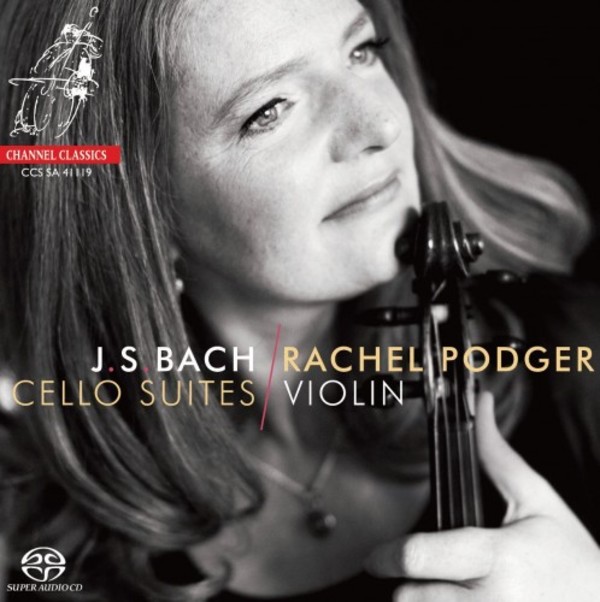 Since, I have spent a fair bit of time coaching cellists, both modern and baroque alike, and found myself playing along to demonstrate various points I gradually could feel these pieces joining the violin partitas and sonatas as another kind of daily bread; I started catching myself playing some of the movements I particularly loved while warming up, and realising that it was actually possible to play them on the violin, and to find a special expressive vocabulary at the higher pitch.

How could one possibly justify it, especially with works that have peppered the recording catalogue with some of the most iconic and adored string performances of all time, the Casals, Fourniers, Torteliers or Starkers? But what I was doing also seemed very much in keeping with Bachs own habit of recycling his own compositions for different instruments and different uses. The examples are endless but I immediately think of the concertos appearing as sinfonias in cantatas, or concertos for violins turned into harpsichord concertos.

The more I reflect, the less I feel the need to be defensive because Bach did far more outrageous things! Think of the Prelude of the E major Partita for violin turned into a full orchestral cantata movement with trumpets and drums
- Rachel Podger

When you realise that Bachs six Cello Suites have been arranged for everything from flute to saxophone and even hurdy-gurdy, you begin to wonder why its taken so long for someone to record them on the violin. Bach was, after all, an inveterate arranger of his own music, with some unlikely and dazzling transformations, such as the Prelude of the E major solo violin Partita into a full-blown cantata sinfonia for solo organ and accompanying orchestra including trumpets and drums. Nevertheless, anyone attempting to arrange Bachs solo cello music for violin needs pause for thought, not least over the loss of resonance and depth of tone in this profoundly soulful music. When, however, that someone is violinist is Rachel Podger, you know that Bachs music is (quite literally) in safe hands.

Podger has lived with this music all her life, as listener and as teacher. Finally appropriating it for her own instrument, she transposes the first five suites up a fifth to match the violins range. So she plays the First Suite (originally in G major) in D major, the Second (originally in D minor) in A minor, and so on. The Sixth Suite, written for the brighter sounding violoncello piccolo, she leaves in the original key of D major, a wise decision which pays off.

Does it all work? Yes, and triumphantly so. The ear takes a little while to adjust to the change of sonority, the treble-dominated brilliance of the violin replacing the mellow tones of the cello. But the listener soon settles down, and revisiting the opening Prelude of the First Suite after that initial shock, it all seems so well-suited to the new medium that you wonder again why its taken so long for someone to record the music like this. Of course, it helps that Podger herself is a sovereign artist steeped in the baroque style, so that its rhetoric, gestures, double-stopping, ornaments and so on come as naturally to her, or so it feels, as breathing itself (and she certainly knows how to let the music breathe, even at faster tempi).

The transposition from cello to violin brings greatest benefits in the many fast movements, which have a lightly sprung, infectious feel which has the listener tapping (or dancing) along, especially at Podgers lively speeds. The menuets, bourrées, gavottes and gigues are especially enjoyable, as are the faster preludes (not least the dazzling opening to Sixth Suite). The allemandes and courantes that feature, like the gigues, in every suite, have a delightful poise. But perhaps the biggest surprise is how successful the more introspective sarabandes are: here Podger gives Bachs reflective thoughtfulness its full due, and reminds us (as she has done previously in her own recording of the Sonatas and Partitas for solo violin) that the violin can be as mellow and meditative as the cello when the situation demands. Most of all, she allows the music to follow its own directions, without loss of overall control or rhythmic discipline.

Ornamentation, particularly on repeats (as in the Gigue to the Third Suite) is imaginative but tasteful, well able to withstand repeated listening. Theres a liveliness to the Channel Classics recording that matches Podgers own playing, and those who have Surround Sound will enjoy the extra dimension this brings. Above all, as on all Rachel Podgers previous recordings of Bach, theres an uninhibited joy in music-making and a sense of sharing in the composers unrivalled inventiveness. In her thoughtful accompanying note, Podger says that Discovering the preludes on the violin was, perhaps, the purest of the joys, and listening to the suites as a whole in this new recording the listener can share that sentiment to the fullest. For those with open ears, its simply unmissable.

Those who want to compare this violin version of the suites with a recording on cello, this month also brings an unusually interesting recording on Challenge Records from period cellist Lucia Swarts, who uses not just baroque cello and violoncello piccolo but, in the brooding Fifth Suite, a Basse de Violon that, with its slightly larger size and added resonance, brings further new perspectives to this endlessly rewarding music.

... the effect of listening to Rachel Podger's captivating performances is akin to a sense of the music having been in some way 'freed up'. ... Without mannerism, distortion or furrowed-brow reverence, she somehow creates the sensation of composing the music as she goes along. ... A spellbinding set that is arguably Podger's finest recorded achievement to date.  Julian Haylock (Recording of the Month)
BBC Music Magazine July 2019

Played on the cello, these sets of stylised dances sit companionably with you beside the ballroom floor. Here, on the violin, they drag you up on to your feet and whirl you around. ... This disc is not a replacement for any of the Bach already on your shelves, but its a joyous addition to it.  Erica Jeal
The Guardian 2 May 2019