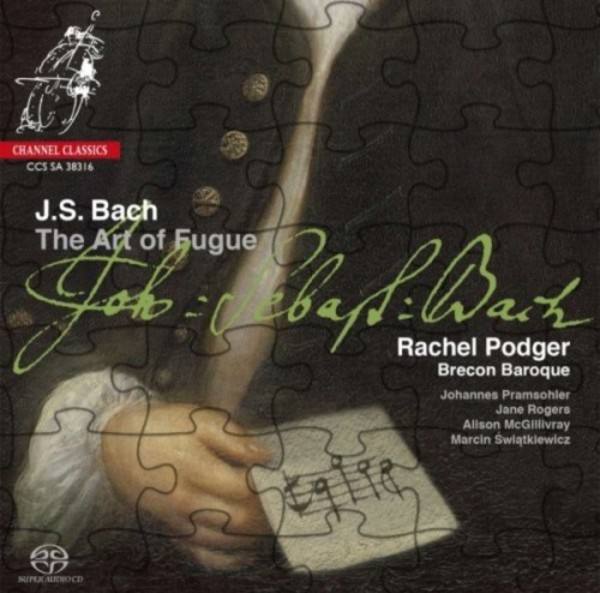 Questions about the implied instrumentation are never going to be answered definitively. Certainly, virtually all the cycle is set out in such a way that it can be played on the keyboard, but the open score format of the original invites interpretation from any potential instrumental combination (or, indeed, even just a soundless reading by the highly trained musician). This question immediately leads on to another  how are we expected to listen to this music? Are we meant to hear a sequence of virtual events or is it to be one event in a single span of time? Is it perhaps the filling out of contrapuntal and motivic possibilities that are all potentially simultaneous and which only have to be strung out in time to render them humanly perceivable? Much of this suggests that the work implies a sort of cyclic time, experienced from the point of view of eternity - in other words, the sort of time that we might imagine God experiences, superior to the messy narrative of human linear time. Yet, there are always human, worldly elements, such as the allusions to French style in Contrapunctus 6, the rhetorical pauses in the very first Contrapunctus, or the playful flow of the mirror fugues or some of the canons. This residue of human habitation is perhaps what distinguishes Bachs fugal works from the fugal (or ricercar) tradition of previous composers and in which later composers heard a voice speaking directly to them, a voice that shared at least some aspects of the modern world, even if it was entirely suffused with the sense of an overwhelming and all-embracing godly order. - John Butt (from liner notes)

The Brandenburg Concertos might be more popular, the Goldberg Variations more dazzlingly virtuosic, the Mass in B minor more uplifting, and the St Matthew Passion more intensely expressive, but there are compelling reasons for regarding The Art of Fugue as the apex of Bachs output, his opus summum. Though he didnt write it on his deathbed, as is sometimes claimed, it was his last big project, perhaps intended as a final submission to Lorenz Mizlers learned Corresponding Society of the Musical Sciences, and it sums up a lifetimes preoccupation with contrapuntally generated harmony and harmonically generated counterpoint. In terms of sheer consistency, not just throughout the work but from bar to bar and note to note, it remains unsurpassed.

There are those audiences and, indeed, musicians, for whom the very word fugue is a deterrent, the musical equivalent of Brussels sprouts or porridge: nourishing but deeply unappetising. And the tendency until recently to perform such works in a robust, four-square, solid, stolid and sober manner has hardly helped (one thinks with mixed feelings of the sawing string orchestra arrangements of yesteryear).

Well, think again! In recent years, there has been a radical reassessment of The Art of Fugues practical potentialities by performers, with an array of thoroughly engaging accounts not just on keyboard (harpsichord, organ, piano) but by all manner of ensembles. Increased awareness of Baroque performing styles and (crucially) possibilities has also helped to breathe new life into this endlessly fascinating music. This exceptional new disc from Rachel Podgers Brecon Baroque stands out among the new generation of recordings for the light and air they let into the work. Using just a string quartet plus harpsichord, variously deployed in the constituent pieces, the musicians imbue each movement with a distinctive character, and the scoring they employ allows the listener (should he or she wish) to trace every line of counterpoint with absolute clarity even in the knottiest passages. They bring phenomenal articulation to the faster pieces (the Canon alla Ottava, track 5, or the gigue-like Contrapunctus 13, track 16), but also the richness of the textures, as in the glorious closing cadences, some of which were expanded by Bach when he undertook a thorough revision of the work after setting down the initial version.

The ordering of movements, left somewhat open by Bach (he did not live to supervise the works printing), is a sensible one, with simple fugues (Contrapuncti 1-4) followed by double fugues, counter-fugues, triple and triple/quadruple fugues, before moving to the later Contrapuncti and Canons. The famous unfinished fugue (Contrapunctus 14) is played last, its final notes left hanging teasingly in the air. Two canons (tracks 13 and 15) are played by harpsichord alone (the excellent Marcin Świątkiewicz)  a taster, as it were, for those tempted to explore harpsichord solo recordings of the work.

With even the more involved fugues such as the magnificent Contrapunctus 11 given a rare buoyancy, and just the closing fugue taking on a more inward, mediative hue, this is an account of Bachs masterpiece that will reach out even to those who normally choose to keep intricate counterpoint at arms length. The recording is warm and sympathetic but superbly detailed, and John Butt, no less, provides the splendidly insightful liner notes. The same unfailing musicality that informed Podgers recent Gramophone Award-winning disc of Bibers Rosary Sonatas is in evidence throughout this new recording, making it required listening for all lovers of great music.

... with playing of this sophistication, the restricted sound palette works wonderfully, supporting a calm, ruminative exploration of the many fugal devices. Rachel Podgers group manages drama too in the French-style fugue, driven by the bite of the bow on the strings. The end is achingly incomplete, as is Bachs text.  Nicholas Kenyon
The Observer 25 September 2016