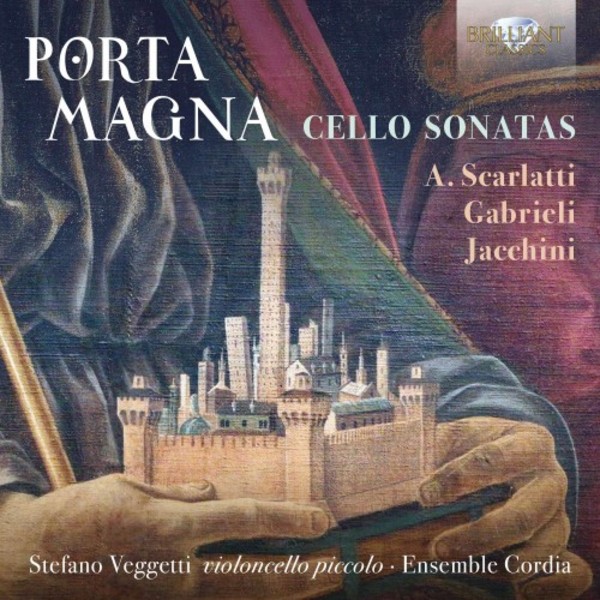 Porta Magna is the name of the main door of the cathedral of San Petronio in Bologna. This church was planned to be the largest in the world, even bigger than that of St Peter's in Rome. Among the great things that have happened here is the creation of the music chapel of San Petronio where between the end of 1600 and beginning of 1800 outstanding musicians have carried out their tasks. Among these Jacchini and Domenico Gabrielli were the first to compose for the violoncelllo solo (the pieces on the CD are their complete works for cello). Over time the expression Porta Magna has meant the place par excellence where making music.
Born in the north-Italian city of Bologna, Domenico Gabrielli (1659-1690) and his pupil Giuseppe Maria Jacchini (1667-1727) became inventor-pioneers of cello music that liberated the instrument from its role as an accompaniment to higher voices (belonging to singers and instrumentalists). It was with the sonatas on this album that the cello first sang with its own true voice. Gabrielli and Jacchini celebrated the nimble and athletic character of the instrument, in music that leaps and dances as much as it sings.
The journey of the Baroque Cello continues further south to Rome and Napoli, to the three cello sonatas by the great master Alessandro Scarlatti, works containing a wealth of melodic invention and poignant lyricism.
Several previous albums on Brilliant Classics have demonstrated the stylish feeling and polished technique of Ensemble Cordia in Baroque and early-Classical-era chamber music. Their album of chamber music by Platti (BC94007) received rave reviews: Platti here receives authoritative interpretations by some of the greatest players in the business. If you want to get acquainted with Platti's music - and there is every reason to - this disc is the best possible way to start.
The ensembles recording of string trios by Anton Wranitzky (BC94339) was similarly welcomed by MusicWeb International: A well-judged recording, allied to stylistically apt performances. The discography of this north-Italian chamber group also includes Telemann (BC94208), a collection of Passionate Baroque Arias (BC94071) and more Platti, an album of cello concertos (BC94722) with the ensembles director Stefano Veggetti as soloist: These are all really interesting and worthwhile works enhanced by the excellent playing of soloist Veggetti, who handles both the lyrical parts with a singing tone and the sometimes fiendish virtuosity of the bookended movements with ease and grace.. (Fanfare).