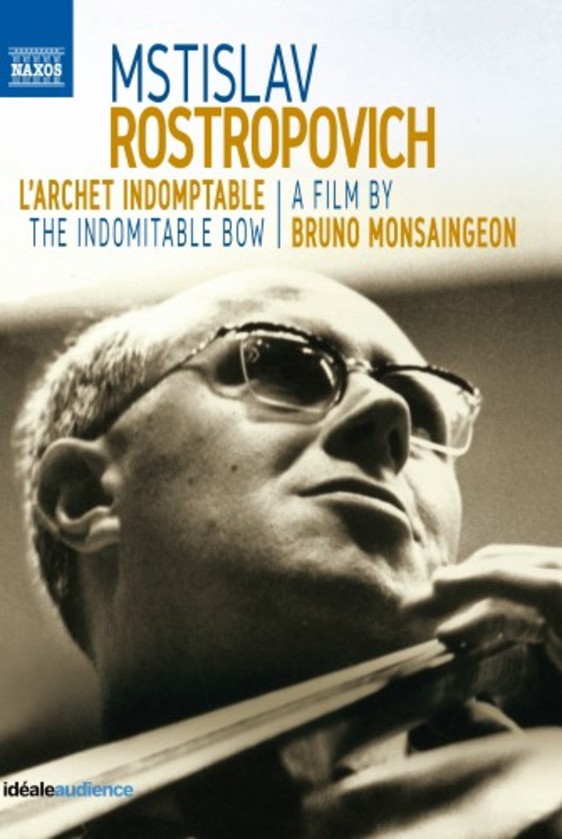 The Indomitable Bow is a unique portrait of Mstislav Rostropovich, a formidable personality as well as a complex, deeply political musician constantly engaged in a whirlwind of activities. Including unreleased documents, archive films, interviews and concert performances from this key figure of the 20th century, The Indomitable Bow is a remarkable testimony of the life and work of the legendary Slava.
Mstislav Rostropovichs story is well known, from the international recognition he gained in the 1950s and his flight from the USSR in 1972 to his achievements in becoming a leading figure in 20th-century music. Bruno Monsaingeons new documentary The Indomitable Bow probes into Rostropovichs life and work in ways previously not possible with the use of rare and unreleased film. The documentary includes commentary from the likes of Shostakovich and Prokofiev, as well as recent interviews in a substantial bonus feature that reveals more about his brave defence of the writer Alexander Solzhenitsyn.
Bruno Monsaingeon has received worldwide acclaim for his film profiles of legendary performers such as Yehudi Menuhin, Glenn Gould, Dietrich Fischer-Dieskau, David Oïstrakh, Michael Tilson-Thomas, Murray Perahia, Sviatoslav Richter, Gennadi Rozhdestvensky and many more. Rostropovichs legacy has already guaranteed his immortality as an artist, but The Indomitable Bow provides us with those added dimensions that bring his character and work significantly closer to us all.
Total playing time: 167 minutes
Picture format: NTSC 16:9
Sound format: Dolby Digital 2.0 and PCM Stereo 7
Language: French, English, Russian
Subtitles: French, English, German, Russian, Japanese, Korean
Region code: 0 (worldwide)
No. of disc/s: 1 (DVD 9)

Prom At The Palace