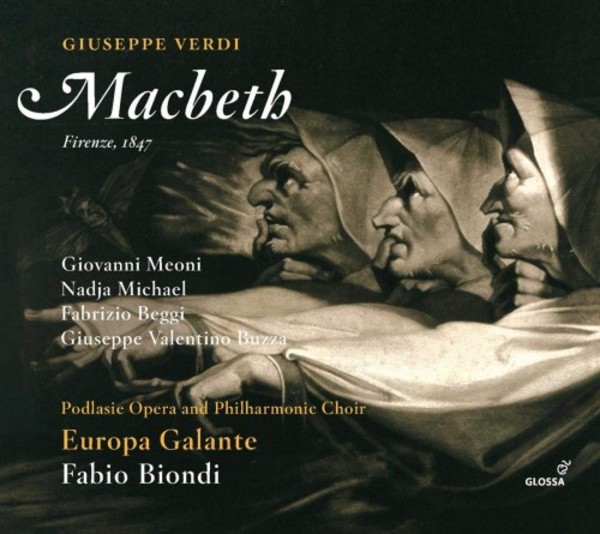 A vivid demonstration of how widely Fabio Biondis musical imagination runs comes with his new recording of Giuseppe Verdis work of genius, Macbeth. It is the original Florentine 1847 version of the work, shorn of the Paris revisions more typically found on record, which Fabio Biondi has opted to conduct, the director believing in its greater dramatic and stylistic coherence.

Verdi was of the opinion that the Shakespearean tragedy was one of the greatest creations of the human spirit and set himself the task of rendering the fire of its drama into music during and following a period when his physical health had broken down.

With its scenes of murder, battle and sleepwalking, brindisi and witches choruses all creating a sombre atmosphere drenched with paranoia and a lust for power, the dramatic flow of the opera places vast demands on the soloists, notably upon the unhappy title-role couple.

Fabio Biondis version comes with baritone Giovanni Meoni, a leading Verdi specialist as Macbeth whilst the larger-than- life role of Lady Macbeth is taken by a noted present-day Salome, Médée (and Medea), the soprano Nadja Michael. Bass Fabrizio Beggi assumes the part of Banquo, both when alive and as a ghost. Important also in the work (and as described by Stefano Russomanno in his accompanying essay) is the chorus, a leading protagonist for the composer, and here the Podlasie Opera and Philharmonic Choir.

Critical also is Verdis orchestral writing for Macbeth, introducing rare and radical tonal colourings and Fabio Biondi, directing his Europa Galante from the violin, is just the radical, challenging musical spirit to breathe new life into Verdis masterpiece and its search for dramatic truth.