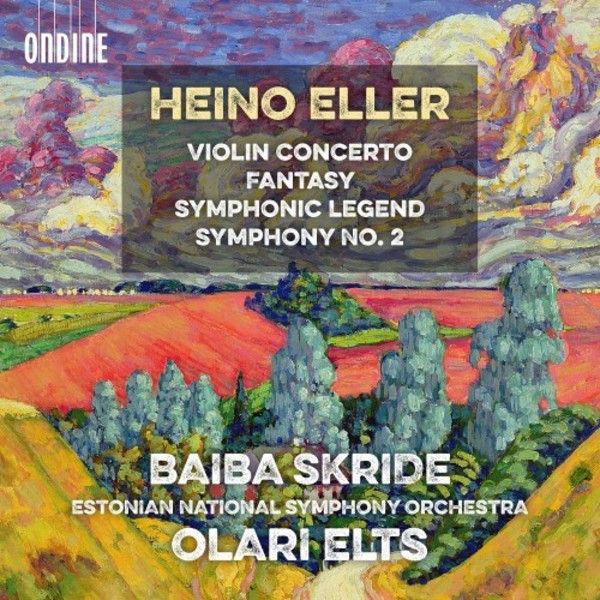 Fantasy in G minor for violin and orchestra
Symphonic Legend
Symphony no.2
Violin Concerto in B minor

Fantasy in G minor for violin and orchestra
Symphonic Legend
Symphony no.2
Violin Concerto in B minor

Heino Eller (1887-1970) can be considered as one of the founders of Estonian professional music culture. Ellers legacy is twofold  in his prolific instrumental compositions he forged an elaborate style that successfully combined both modern and national elements, and as a prominent professor of composition during half a century he influenced generations of Estonian composers. This new recording by the Estonian National Symphony Orchestra conducted by Olari Elts and featuring violinist Baiba Skride includes some of the highlights from the composers catalogue of orchestral works and is a fitting tribute to the centenary of Estonias independence.

Heino Ellers Violin Concerto in B minor was the first in its genre in Estonian music, and still one of the finest in the Estonian concerto literature. First written in the 1930s the one-movement work was scheduled to be performed in Tallinn on June 1940. For reasons unknown, the work was withdrawn until March 1965 when Neeme Järvi conducted the premiere of the work. During the 1980s this work was performed several times and eventually recorded. Another work for violin and orchestra, Fantasy, was first written in 1916 and orchestrated in 1964. Fantasy is one of the earliest compositions that bears the hallmarks Ellers individual style, and its sensitive lyricism and charming simplicity give the work an enduring appeal.

The Symphonic Legend is Ellers largest score prior to the First Symphony (1936). It was premiered on June 1923 in Tartu, and Eller revised the score for performance in 1938. A work with a wealth of musical material and masterly orchestration, Symphonic Legend was next performed only in 2014 by Olari Elts with the Estonian NSO, and the current recording is the first.

Heino Eller wrote three Symphonies between the 1930s and 1960s. Unlike his other two Symphonies, the Second Symphony has only one movement. The work was abandoned soon after the Zhdanov decree was published in February 1948, and only the first movement remains. The severe and at times tragic nature of the music was incompatible with the demands of the official Soviet cultural ideology. Although the work was recorded in 1984, the Symphony was not performed publicly until as recently as September 2012.

Heino Eller was much more than anything I can express in words. It was largely due to him that music in Estonia was able to achieve a cultural and professional dignity.  Arvo Pärt