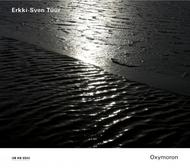 Tracks:
Oxymoron  contradictory terms in conjunction  seems to be a perfectly appropriate title for a CD presenting four pieces written between 1991 and 2005 by Estonian composer Erkki-Sven Tüür for different vocal and instrumental line-ups: Salve Regina is one of a burgeoning number of pieces of a religious nature that Tüür has written recently; the earliest piece here is the short Dedication for cello and piano; the central work, Ardor, is a 25-minute concerto for that rather neglected instrument, the marimba, while the large ensemble piece that gives the album its title, Oxymoron, was inspired by the Alps.

Tüürs writing is characterized by juxtapositions of seemingly heterogeneous musical idioms always moulded with a rare sense of architecture and musical dramaturgy. Oxymoron is the fourth ECM release dedicated exclusively to his music. It follows Exodus (472 4972) which featured the CBSO conducted by Paavo Järvi in three major orchestral works. These included the Violin Concerto, performed by Isabelle van Keulen, which she also played to great acclaim at the 2003 BBC Proms.

Tüür (born 1959) has become the pre-eminent Estonian composer of his generation and, like Arvo Pärt before him, his music has proven an international phenomenon. Part of its appeal is its universality. A composer who began as a rock musician, Tüür has a delightfully unblinkered and unprejudiced approach to music making. Refusing to be swayed by any of the orthodoxies of contemporary composition, he combines, contrasts and finally synthesises elements of all of them into a convincing and organic idiom entirely his own.

Tüürs compositions have a wild, inventive edge, bringing together two utterly opposed styles  minimalism and modernism  and blending them or building dramatic tensions between them in a way so natural that it has to be heard to be believed... The orchestral works are equally compelling: witty, expressive and dramatic." - The Strad

For some years now Erkki-Sven Tüür has been routinely described as the leading Estonian composer. With this disc he not only justifies that label but lays claim to wider recognition... The rewards are great. This is music that is exhilaratingly open to experience - Gramophone