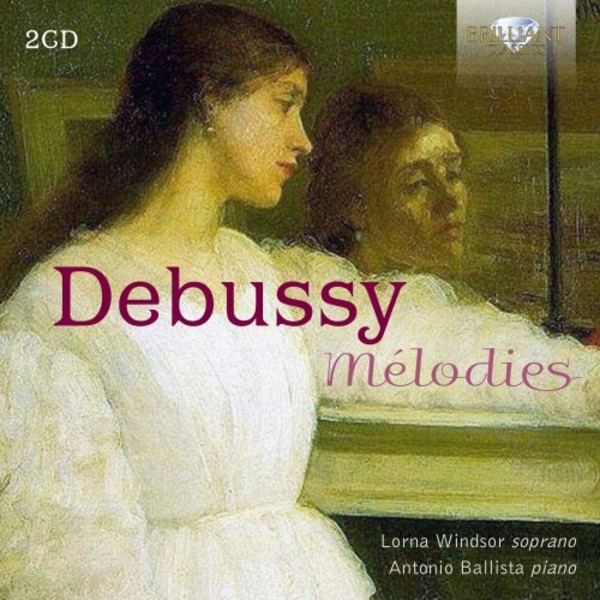 A much-recorded and lauded Italian pianist joins an exciting young multilingual soprano for an extensive collection of Debussys songs: a significant recorded contribution to the celebrations of the composers centenary.

Debussy wrote songs throughout his career, beginning at the age of 18 with Nuit détoiles, with which this collection also begins. Most of his vocal output was inspired by the singers he encountered as a young man in the fashionable salons of fin-de-siècle Paris, and in particular the soprano Blanche Vasnier: from that time, Debussys songs resembled an amorous diary of dreams and desires of infinite sweetness, entrusted to a voice capable of the utmost seduction. The epilogue to his love story with Vasnier is heard in Apparition, after which Lorna Windsor moves to the years of Debussy in Rome, and in particular his sumptuous settings of Baudelaire. There follow the much more elusive settings of Verlaine and Rimbaud, dating from his impressionist and even post-impressionist late years, and often inspired by his encounter with the soprano Mary Garden, the first Mélisande.

Lorna Windsor has established a reputation as a specialist in contemporary music: her catalogue on Brilliant Classics includes the songs with piano by John Cage (8850) and a more recent, wide-ranging album of solo-vocal music by Feldman, Kagel, Kurtág and others. She also has considerable experience in French repertoire, having studied with the doyen of French baritones, Gérard Souzay, and given performances in France of Offenbach and Satie, as well as recording the songs of Satie.

A further point of interest to the album concerns the piano used by Antonio Ballista: a 1923 Pleyel. Ballista himself was born just 13 years after the piano was made, and for more than half a century he formed half of one of the best-known and most recorded piano duos of their time, in partnership with fellow Italian Bruno Canino. Though he has accompanied many eminent singers such as Cathy Berberian, Anna Caterina Antonacci and Kim Criswell, his work with singers has been very rarely represented on record, making this album a collectors item in Ballistas distinguished career as well as a ravishingly idiomatic record of French song.