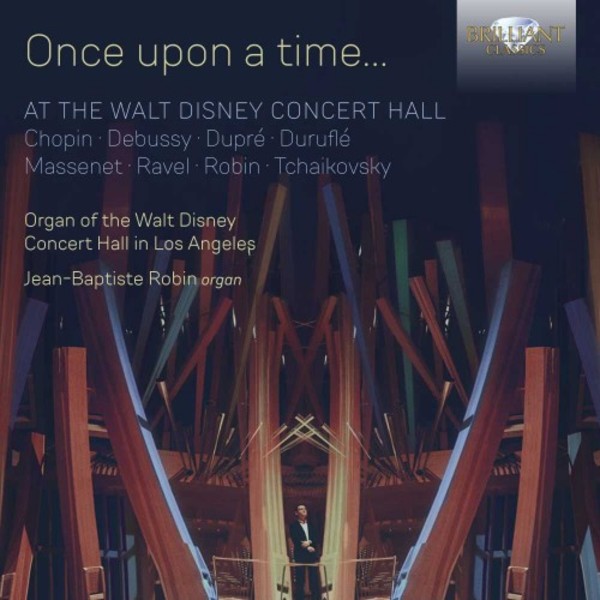 Once Upon a Time... At the Walt Disney Concert Hall

Improvisation on Fairy Tales
The Hands of Time

Improvisation on Fairy Tales
The Hands of Time

Like Virgil Fox before him, Jean-Baptiste Robin has a mission to popularize the organ by performing music on it that might already be familiar in other versions. The French virtuoso already has an estimable discography of his own and other composers music, including a well-received debut on Brilliant Classics, Symphonic Organ (94726), which features the showpiece E.M. Skinner instrument now located in the Cincinnati Museum Center at Union Terminal in Cincinnati, Ohio.
For his latest album, Robin has pitched up in Los Angeles to play the kaleidoscopic Rosales organ installed in 2004 at the Walt Disney Concert Hall organ. This has already featured on recordings of the Saint-Saëns Third Symphony, and its reeds and mixtures are eminently suited to the colours of the French Romantic repertoire.
And in a hall sponsored by Disney, why not tell magical stories? Robin has devised a fairy-tale for organ, opening with an improvisation on the March from Tchaikovskys Nutcracker. Clouds gather over the grim passacaglia opening Duruflés three-movement Suite, op.5 (dedicated to Dukas, he of the Sorcerers Apprentice), but they clear in the lilting Sicilienne, and the sun shines brilliantly over the concluding Toccata, a true organ showpiece. There follows the dreamy Clair de lune, whose gently sustained mood is admirably suited to sensitive organ registration, and the Raindrop Prelude of Chopin. Preceding his own powerful reflection, The Hands of Time, Robin plays his own transcription of the Mother Goose Suite by Ravel. Inspired by the composers orchestration of the ballet, he accentuates the solo reeds (clarinet, cor anglais, cromorne, oboe), as well as the acutely refined swell box.
Robins own transcriptions are entertaining and effective, and they demonstrate the Skinner organs potential He is an imaginative player, with a flair for drama, but he doesnt allow the music to turn into a vehicle for his ego This disc is a must for organ fanciers, as long as they are not too rigid, and it can be enthusiastically recommended. - Fanfare magazine reviewing Symphonic Organ