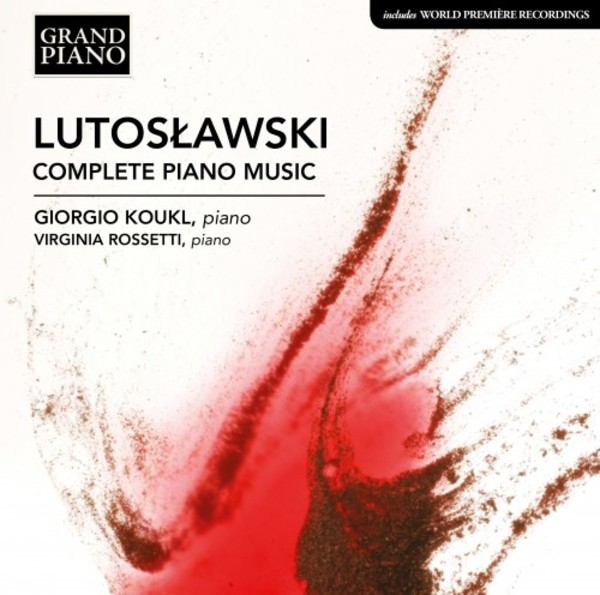 Witold Lutosławskis few surviving apprentice works are suffused with the elegance of Ravel and the lush effusiveness of Szymanowski, and this is particularly true of the early Piano Sonata, heard here in Giorgio Koukls new and corrected edition based on the original manuscript. Further premières include the wistful A Kiss of Roxanne and the technically complex Invention. Including all of the folk-music tinted pedagogical miniatures, works for piano four hands and other occasional pieces, this is the most comprehensive edition of Lutosławskis works for solo piano ever recorded.

Giorgio Koukl is a Czech pianist/harpsichordist and composer. He studied in Prague at the State Music School and Conservatory, and continued his studies at both the Conservatories of Zürich and Milan, where he took part in the masterclasses of Nikita Magaloff, Jacques Février, and Stanislaus Neuhaus, and with Rudolf Firkuný, friend and advocate of Czech composer Bohuslav Martinů. It was through Firkuný that Koukl first encountered Martinůs music. Since then he has developed these into an important part of his concert repertoire and is now considered one of the worlds leading interpreters of Martinůs piano music. Koukl has also recorded the complete solo piano works of Paul Le Flem, Alexander Tcherepnin, Arthur Lourié, Vítězslava Kaprálová, Witold Lutosławski, and, most recently, Alexandre Tansman.

Virginia Rossetti (b. 1988) began her piano studies with Massimiliano Ferrati, later attending the Antonio Buzzolla Conservatory in Adria. In May 2013 she obtained her Master of Performing Arts with distinction at the Hochschule für Musik in Basle with Filippo Gamba, and in 2014 at the Royal Flemish Conservatoire of Brussels with Aleksandar Madzar. She was recently awarded a Master in Pedagogy at the Conservatorio della Svizzera italiana in the class of Anna Kravtchenko. She is a prizewinner of several national and international piano competitions.