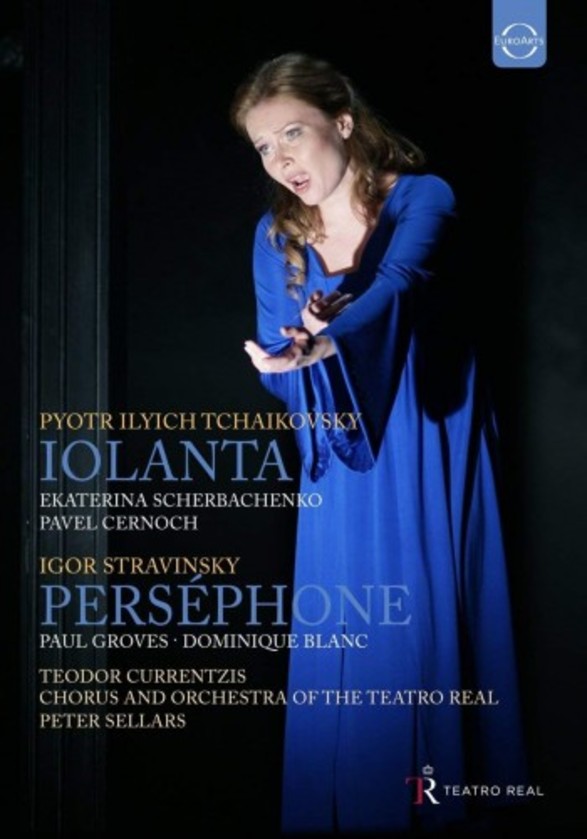 Unanimously acclaimed, Peter Sellars new production of these two masterpieces was one of the great highlights at the Teatro Real. The orchestra and cast, including Ekaterina Scherbachenko and Paul Groves, are lifted to rare heights of poetic expression under the  daring and insightful baton of Teodor Currentzis.

Iolanta, a mature composition by Tchaikovsky, was premiered in 1892 and it contains all aspects of the composers mastery: beautiful melodies, clear structure and genuine passion in its many varieties.

Perséphone has only one singer, the priest Eumolpus, who functions largely as a narrator. The orchestral writing is melodious, with a solo woodwind or brass instrument often presenting an arresting, even jaunty theme over a simple rhythmic accompaniment.

Directed by Peter Sellars and conducted by Teodor Currentzis, this unusual double bill, from Madrid's Teatro Real, pairs Tchaikovsky's last opera, Iolanta, with Perséphone, Stravinsky's 1934 melodrama for singers, dancers and actors. Sellars, uncompromising as always, views each heroine in political-religious terms: Iolanta, the blind girl who wills herself to see so as to experience love, represents human striving towards God; Perséphone, descending to the underworld to relieve the suffering of its inhabitants, embodies belief in action. The Tchaikovsky, though musically strong, is at times too didactic. Perséphone, however, is extraordinarily beautiful. There are fine performances from Dominique Blanc in the title role and Paul Groves as Eumolpe. The real touch of genius, though, is Sellars' decision to reimagine the piece in terms of eastern dance rather than ballet, and the choreography, by Cambodia's Amrita Performing Arts, is exquisite.  The Guardian