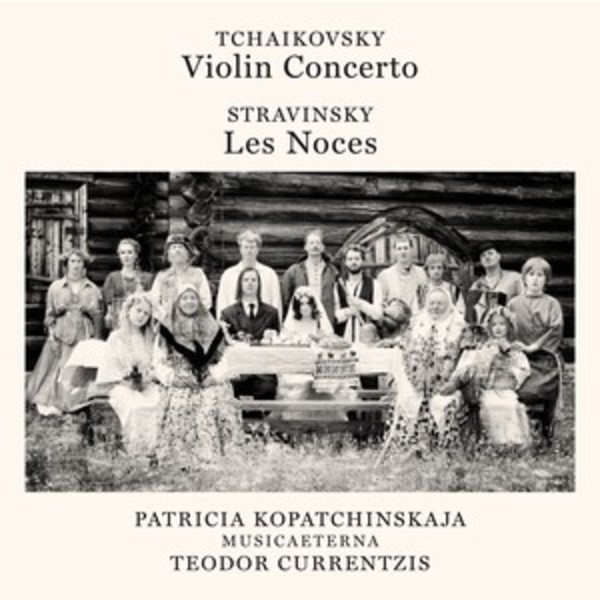 Testament to the versatility and musical command that Teodor Currentzis and his unique orchestra and choir possess, this new album brings together two diverse masterworks from two titans of Russian music.

Although they have already been acquainted for a long time, this recording represents the first musical collaboration between Teodor Currentzis and the exceptional violinist Patricia Kopatchinskaja. The instant artistic rapport (an 'artistic wedding' of sorts) between these two maverick musicians can be heard in this dynamic new recording of Tchaikovskys Violin Concerto - one of the most popular works in the violin repertory.

Currentzis authentic approach to the folk influences in Stravinskys music (as revealed in 'Le Sacre du Printemps') is again very present in his interpretation of Les Noces. This work for percussion, pianists, chorus and vocal soloists - originally composed as ballet music - is probably one of Stravinskys most rarely recorded works. The work is based on a Russian peasant wedding, which the cover artwork references.

Exceptional to this new recording is that the MusicAeterna choir members are all native-Russian speakers who bring another level of understanding and authenticity to the work. After her prominent participation in the 'Rameau  The Sound of Light' recording, Nadine Koutcher  freshly crowned '2015 Cardiff Singer of the Year' - returns to sing the leading soprano solo part in Les Noces.

Traditionalists will no doubt be outraged at what seems on paper to be a deliberately wilful, perverse and mannered approach to an old favourite. Yet such is the force of personality, conviction and unanimity of intention with which Kopatchinskaja and Teodor Currentzis project the musical argument that I was completely bowled over. The whole performance reminds us of the daring originality of Tchaikovsky's masterpiece [...] [T]his unconventional pairing of two very different works is both effective and imaginative, particularly given the quality of the performance. Erik Levi
BBC Music Magazine March 2016

Teodor Currentzis and his MusicAeterna are a welcome astringent in the modern recording world, giving us daring period takes on Così fan Tutte and Le nozze di Figaro and making Rameaus wonderfully wacky music more attractively wayward than we thought possible. [...] Stravinskys Les Noces [...] is gritty and intelligent and greatly enhanced by having an all-Russian cast of singers, chorus and players. Stephen Pritchard
The Observer 31 January 2016