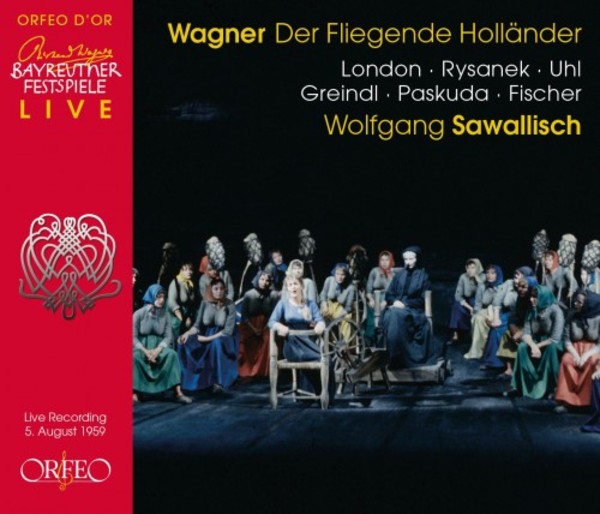 Although Wagner himself made it quite clear to King Ludwig II of Bavaria that the Flying Dutchman was among those works of his deemed fit to be performed in Bayreuth, the 'Romantic Opera in three Acts' was not staged there until 1901, as the last of those ten. 1959 was a special year in 'New Bayreuth': by producing the earliest, Wieland Wagner had now presented all ten works under his own direction, in the first 'Ring-free' year since the 1951 reopening  an abomination to hard-bitten old-school Wagnerians, for whom only the Ring and Parsifal genuinely belonged on the 'green hill' of Bayreuth. There was once again heated discussion over the guiding principles governing the presentation of the festival  as reported, along with much else, in the well-informed and lively booklet-note by Festival public relations officer Peter Emmerich. But Wieland confounded and convinced his critics yet again with a 'rediscovery' of his directorial idiom, described by him as 'magic realism'. Musical success was achieved on the grand scale by the brilliant exponents of Senta (dubbed by Wagner 'the woman of the future') and the Dutchman  and by the musically modern slim-line conductor, who had made his successful Bayreuth debut not long before in the new production of Tristan (just released by Orfeo - C951183D). Leonie Rysanek, whose singing gave vivid meaning to all the dramas emotional aspects, also had the figure for the part  in her own words, she was the 'slimmest Senta in the world'. With his powerful voice and darkly glowing male timbre, the inimitably elegant and empathetic George London remains without peer on this recording as elsewhere. Just as convincingly cast in its other roles, the work soon established itself in this second 'New Bayreuth' staging even in its spiritual home. We would make a special point of observing that this historic audio document was captured not at the premiere performance, but during a second live recording on 5 August 1959.
Cast:
- Daland: Josef Greindl
- Senta: Leonie Rysanek
- Erik: Fritz Uhl
- Mary: Res Fischer
- Steuermann: Georg Paskuda
- Holländer: George London

Clearly one of Wieland Wagners great New Bayreuth nights. ... Inspired by Wielands punky Brechtian new production of the opera, Sawallisch ... returned to as much detail of Wagners original Dresden score as was then known about. ... The cast is on fire as well. Is this now George Londons greatest recording? With its mix of power, agony and scariness (Den fliegenden Holländer nennt man mich) I think so. Leonie Rysanek, to be replaced in following years by Wielands muse Anja Silja, is also in superbly risky form ... this now takes top recommendation as a performance for all except mono phobes.  Mike Ashman
Gramophone November 2018