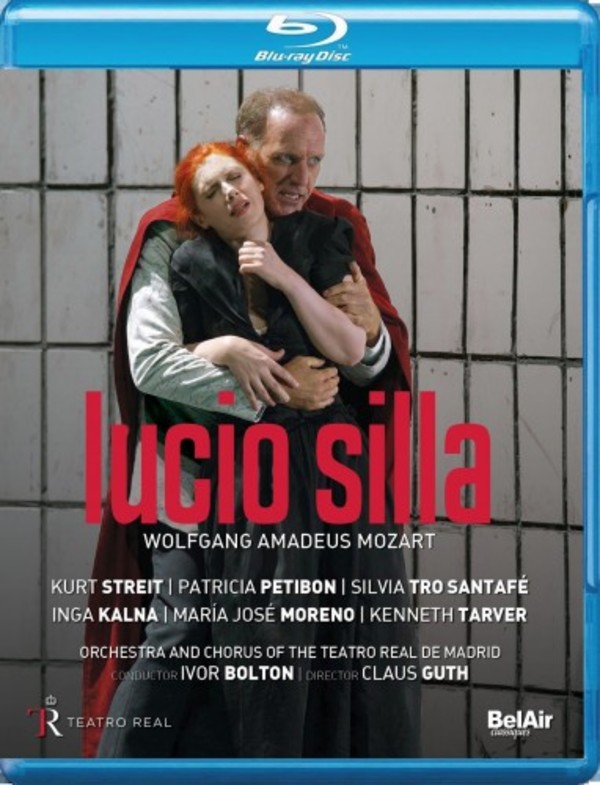 Mozart was not yet seventeen when Lucio Silla was created in Milan one December evening of 1772, yet we can still identify some of the elements that established the exceptionally-gifted child musician as the greatest composer of all times. Indeed, with Lucio Silla, although a neoclassical 'opera seria' in every way, it seems that Mozart was already learning to deconstruct and to free the traditional forms of musical drama from archaic conventions.

The opera is centered around the love that Roman dictator Lucio Silla bears for his enemys daughter Giunia, who favours the exiled senator Cecilio. After many twists and turns, the lovers are united in marriage and Silla renounces his crown.

Tenor Kurt Streit is Lucio Silla, and soprano Patricia Petibon is Giunia for the last time, after having gained international recognition thanks to her numerous performances in this role, while mezzo-soprano Silvia Tro Santafé is the ardent Cecilio. In this monumental production, Claus Guth finds a way to respect both the classical setting and the formal innovations that make the opera so interesting. Ivor Bolton conducts the Orchestra and Chorus of the Teatro Real.

"The singers shine at another level, starting with an excellent Patricia Petibon as Giunia, absolutely commited to her role with an absolute controle of the coloratura and with an intense legato, her arias, of an extreme difficulty, were handled with great ease and overwhelming dramatic abilities."  Operaworld

Christian Schmidts revolving set presents two contrasting worlds. That of Lucio Silla is a place of grubby white tiles and confinement, devoid of pomp and indicative of crumbling power; that of the brave Cecilio and his beloved Giunia is all dark blue tunnels and long shadows. ... Having established the contrast between these worlds, [director Claus] Guths most touching moments are where we sense both the closeness and distance between them. ... Its a fascinating and demanding production, for the viewer as well as, clearly, the performers.  Hugo Shirley
Gramophone August 2018