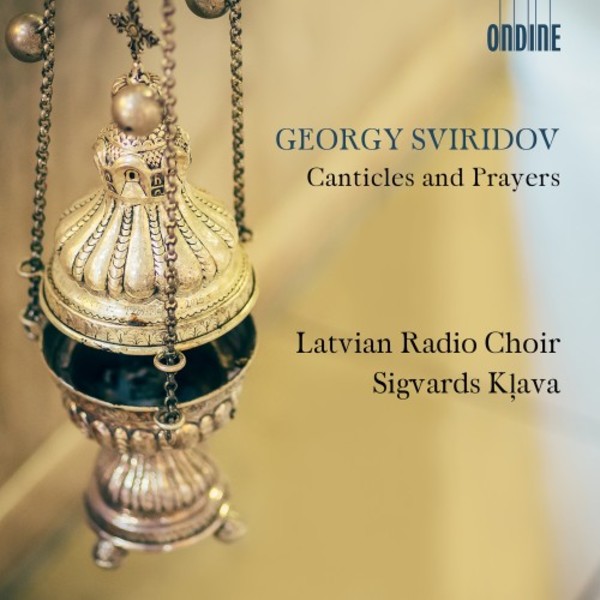 Georgy Sviridovs (19151998) Canticles and Prayers is considered by many as one of the most important works in Russian sacred music. In this new recording Latvian Radio Choir under Sigvards Kļava offer impressive renditions of music from this collection by the Russian master.

Sviridov, a pupil of Shostakovich, began writing religious works since 1969. Since then these works came to form an important part of his oeuvre. In the 1980s Sviridov had several projects to write a liturgy or a mass. In the end, the sketches of his sacred music came to form a cycle titled Canticles and Prayers. The work was created at a turning point in the history of Russia, the perestroika years that ended in the collapse of the Soviet state. The composer was keenly affected by the events of those years, building a monument to his era. The main body of Canticles and Prayers was assembled between 1988 and 1992. In September 1997, Sviridov selected the versions he thought best, approving the final order for the first three parts and making the final edits to the score. This work remained incomplete at the time of his death in 1998. Canticles and Prayers was thus Sviridovs last work. The recording also includes chorus The Red Easter (1978) based on a cycle of Easter hymns.

The releases of the Latvian Radio Choir on Ondine have been highly successful. For instance, the recording of Rachmaninovs All-Night Vigil (ODE12065) was chosen as the Record of the Month, Editors Choice and received a nomination in the Gramophone Awards in 2013. Also, their recent releases of choral works by Valentin Silvestrov (ODE 12665) and Eriks Esenvalds (ODE12472) received Gramophone Editors Choice.