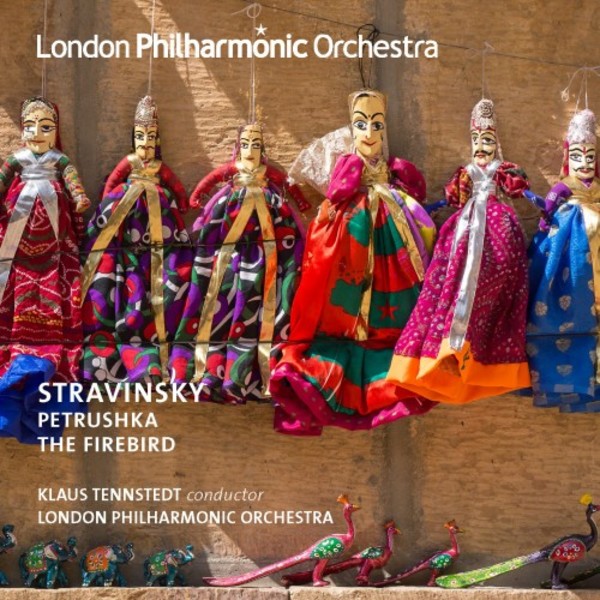 The two works on this disc were conducted by the late Klaus Tennstedt who had a long and close association with the London Philharmonic Orchestra, including serving as Principal Conductor from 198387. Tennstedt rarely conducted ballet music, but his physical exuberance shines through in these rare recordings.

This is the first ever release of Stravinskys works conducted by Klaus Tennstedt and it adds to a growing collection of his critically acclaimed live performances on the LPO label. Beethovens Sixth Symphony (LPO-0085) is a Gramophone Editors Choice and was described as a visionary performance. Of the collection of Mahlers symphonies (LPO-0100), Classic FM Magazine said musically it sweeps away everything before it.

The pieces come from early in Stravinskys career. The Firebird was the first full-length score Stravinsky wrote for Sergei Diaghilevs Ballets Russes. Based on an old Russian folk tale, it tells the story of a young prince who battles an evil demon-king with the help of the mysterious and magical Firebird.

Following the success of The Firebird Stravinsky began work on his second ballet. Petrushka once again occupies a typically Russian setting, a fair in St Petersburgs Admiralty Square bustling with revellers and popular Russian melodies. In the centre of the scene, three puppets brought to life dance and squabble as the mesmerised audience looks on.

This release coincides with the London Philharmonic Orchestras year-long celebration of the life, work and inspirations of Igor Stravinsky in Changing Faces: Stravinskys Journey.

The phenomenon that was Tennstedt in concert will never, can never, be recreated. - Gramophone