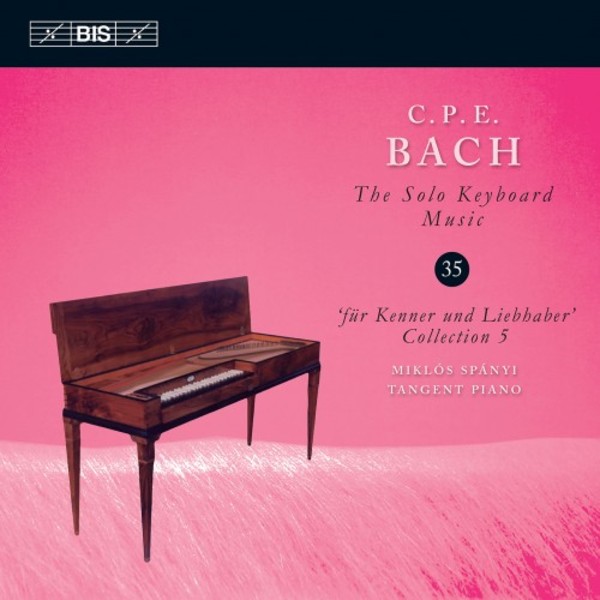 As Carl Philipp Emanuel Bach published successive collections of the Kenner und Liebhaber series, he explored new genres and styles. In the second collection he added his idiosyncratic rondos, and in the fourth he included free fantasias. The fifth collection, composed between 1779 and 1784, contains no new genres, but displays more variety in terms of textures and thematic ideas than any of the previous volumes. In fact, Bachs preoccupation with variation is almost obsessive  it is as if he cannot finish phrases without varying either texture, tonality, rhythmic pulse or dynamics.

To the six Sonatas, Rondos and Fantasias that make up the collection, Miklós Spányi adds two independent works. Bach initially composed 17 variations on the folk-like tune Ich schlief, da träumte mir in 1752 (included in Vol. 19 of this series) but returned to it almost twenty years later, publishing seven new variations. Closing the disc is another set of variations, now on an original theme, an Arioso sostenuto in A major.

Miklós Spányi began his survey of the Kenner und Liebhaber collections on the clavichord but the following discs have featured the tangent piano. And 35 discs into this monumental series, individual volumes are still being warmly greeted, for instance on EarlyMusicReview.com where the reviewer of Volume 32 (BIS2205) professed to be invariably struck not only by the originality of C.P.E. Bachs keyboard writing, but also the high level of performance consistently maintained by Miklós Spányi.