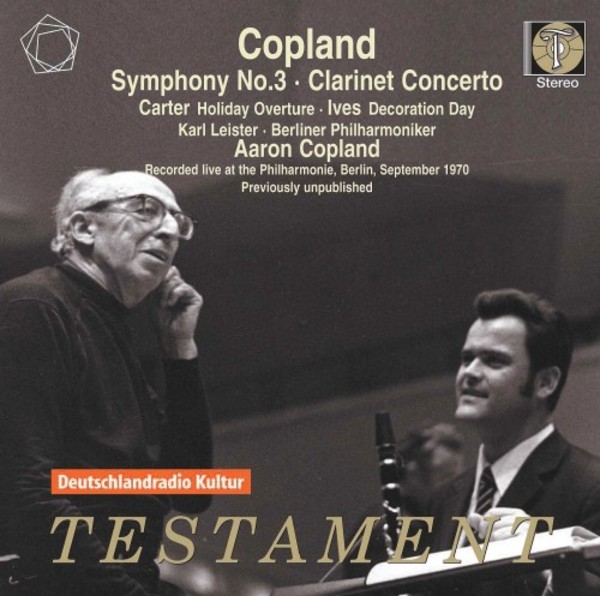 American music certainly does not belong to the standard repertoire of the Berlin Philharmonic Orchestra. For this reason, the fact that Aaron Copland, the dean of American composers, conducted a concert of the Berlin Philharmonic during the Berlin Festival Weeks in the autumn of 1970, a few weeks prior to his seventieth birthday, must be regarded as a small sensation. The programme included the Holiday Overture by Elliott Carter, Decoration Day by Charles Ives, and Coplands own Clarinet Concerto and Third Symphony. The recording of the concert also attests to the artistry of Karl Leister, who was the Berlin Philharmonics principal clarinettist for thirty-four years. Born in Wilhelmshaven in 1937, Leister received his initial instruction in clarinet playing from his father.

Copland wrote his Clarinet Concerto for Benny Goodman during 1947-48. The orchestral ensemble is limited to strings, harp and piano. Goodman did not have any special demands to make about what Copland should compose: He had completely free rein, except that I should have a two-year exclusivity on playing the work. [] At the time there were not too many American composers to pick from. [] We never had much trouble except for a little fracas about the spot before the cadenza. [] Aaron and I played the concerto quite a few times with him conducting and we made two recordings.

Between 1944 and 1946 Aaron Copland composed his Third Symphony for Serge Koussevitzky and the Boston Symphony Orchestra. This work, premiered on 18 October 1946, marked a stylistic shift in the composers work. The finales opening fanfare is based on the Fanfare for the Common Man written by Copland in 1942.

Elliott Carter, whose long life included some eighty years of composing, described his Holiday Overture as an important work of transition. It was here that he, for the first time, had consciously used different contrasting layers of musical activity at the same time. He composed the overture on Fire Island, New York, in 1944, inspired by the news of the liberation of Paris by Allied troops on 25 August of that year.

In many works by Charles Ives a sentimental strain linked to the composers memories of his youth in Danbury, Connecticut, finds expression. Here old hymn tunes or folk melodies, chorales, marches, or quicksteps for military bands, and similar things are encountered. He regarded his Symphony: New England Holidays more as a grown mans memories of certain holidays of his childhood.