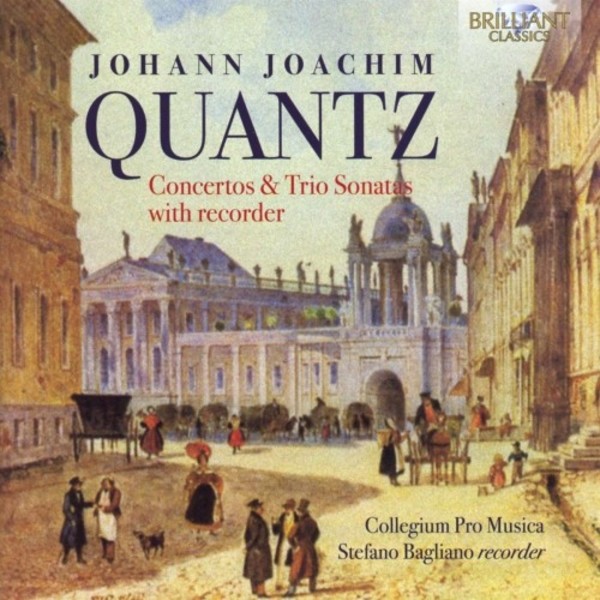 An attractive introduction to one of the seminal figures in 18th‐century music.

Apart from being a virtuoso flautist, Johann Joachim Quantz (16971773) was also a theorist, composer and flute maker of outstanding stature and acclaim. Despite his humble origins as the son of a blacksmith, he rose to great eminence in the 18th-century flute world, becoming a personal friend of Frederick the Great of Prussia and living happily at the emperors court in Potsdam, where for 32 years. During this period he wrote and performed over 300 works for the flute, playing them on specially devised instruments that brought out their particular melodic vein.

Quantz is in many ways the father of the flute, as instrument‐maker, composer and finally performer. His own music owes much of its zest and charm to contemporary Italianate examples such as Vivaldi, whom Quantz met in Venice.

Almost 300 concertos survive, and over 200 sonatas: where to start with so prodigious an output? On this new recording, Stefano Bagliano has selected two concertos (in F major and G minor, nicely contrasted) and a pair of trio sonatas, in C major and again in G minor, the close relative of B flat major to which the flute is technically well suited: many sinfonias and movements of designedly pastoral character have been composed in those keys with the flute playing a starring role. Indeed, all the slow movements on this recording are distinguished by their gently flowing, pastoral character.

This is the latest disc in the extensive and well‐received discography of Stefano Bagliano, period‐instrument flautist, recorder player and ensemble‐leader, on Brilliant Classics. Previous successes include discs of Vivaldi (BC94332), Telemann (BC94334), C.P.E. Bach (BC94864) and Fiorenza and Mele (BC93956). A bountifully filled disc of splendid music in first‐rate performances, remarked MusicWeb International of the Collegium Pro Musica/Bagliano album of Sammartini (BC94157). The Collegium Pro Musica has a fine, warm, authentic sound.