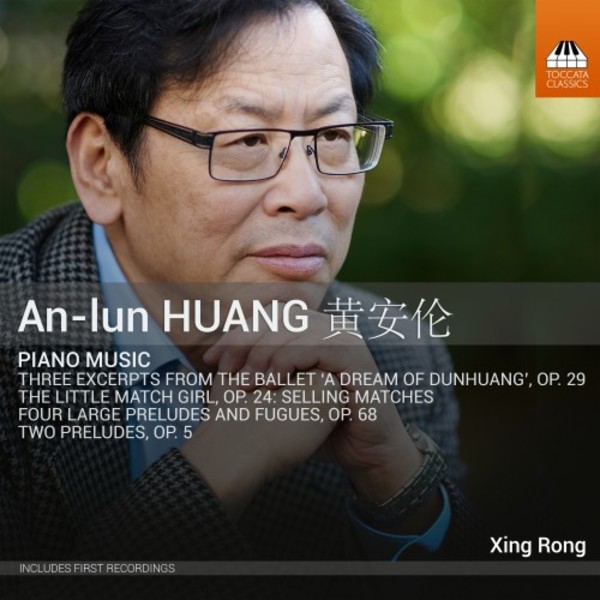 An-lun Huang was born in Guang Zhou, Guangdong, in 1949, and has lived in Toronto since 1986. He survived the hardships of the Cultural Revolution, where he was sent to work in the ricefields, to make his mark as pianist and composer both in China and in the west. In his piano music he is concerned to find a meeting ground between the piano as a western instrument and his own roots as a Chinese musician.

This album shows the cross-fertilisation going in both directions, with a lively dance suite from a ballet inspired by the ancient cave art in Dunhuang, in western China, and the universal figure of Bach stimulating a substantial set of polyphonic compositions where western harmonies are refracted through Chinese colours.

Lang Lang played a composition of An-lun Huangs in the qualifying round of the Tchaikovsky competition that brought him to fame. This is the first appearance of a Chinese composer in the Toccata Classics catalogue.

Xing Rong has won several major prizes in competitions, among them the Chinese Pieces Competition held in Tianjin in 1997, the Beethoven Piano Competition in Hainan in 2004, and the Hong Kong Piano Asia Open Competition in 2007. In 2015 she was a prize-winner in the American Protégé International Piano Competition and made her United States debut in Carnegie Hall in New York City. She studied at the Cleveland Institute of Music with Antonio Pompa-Baldi, the Boston Conservatory of Music with Jonathan Bass and Alexander Korsantia and at the University of North Texas for the Doctor of Musical Arts Degree in piano performance with Joseph Banowetz.