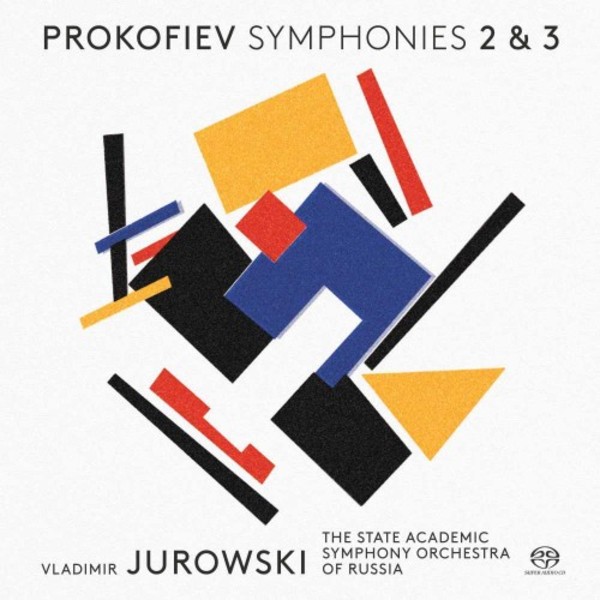 The acclaimed Russian-born maestro Vladimir Jurowski kicks off his new cycle of the complete  symphonies of Prokofiev for Pentatone with a searing account of the challenging and uncompromising second and third symphonies.

Forged out of "iron and steel", the rarely-performed Symphony No.2 uses strident fanfares, martial rhythms and clashing dissonances to create great walls of sound to represent the inexorable march of the machine age. It's a deliberately modernist work, written while the composer was in Paris in the 1920s and intent on provoking audiences. The stark first movement is balanced by the second movement which is in the form of six disparate variations. Containing more subdued and lyrical moments, these variations build towards a relentless march, culminating in a series of hammer blows from the orchestra to end the work with a ghostly calm. The Symphony No.3 recycles material from his opera The Fiery Angel to great dramatic and terrifying effect. It's an angry, defiant and complex work which contains a lyrical slow movement, a dazzling third movement in the form of a devilish scherzo and an almost unhinged final movement which starts as a sinister march and builds to an apocalyptic climax of alarming power.

Vladimir Jurowski has recorded extensively for Pentatone and has received enthusiastic critical acclaim. In July 2017, he signed a long-term, multi-album agreement with Pentatone which includes a new complete cycle of the symphonies of Sergei Prokofiev with his State Academic Symphony Orchestra of Russia "Evgeny Svetlanov". Also scheduled for 2018 with the same forces is a recording of Tchaikovsky's complete ballet Swan Lake.

"There is something profoundly, even unmistakably Russian in these works. I am deeply convinced that only a Russian orchestra can add something special to this music ... That is why I am delighted to record Prokofiev's symphonic oeuvre with the State Academic Symphony Orchestra of Russia 'Evgeny Svetlanov' for PENTATONE. Especially to Western ears, this could open up a whole new sound-world." - Vladimir Jurowski