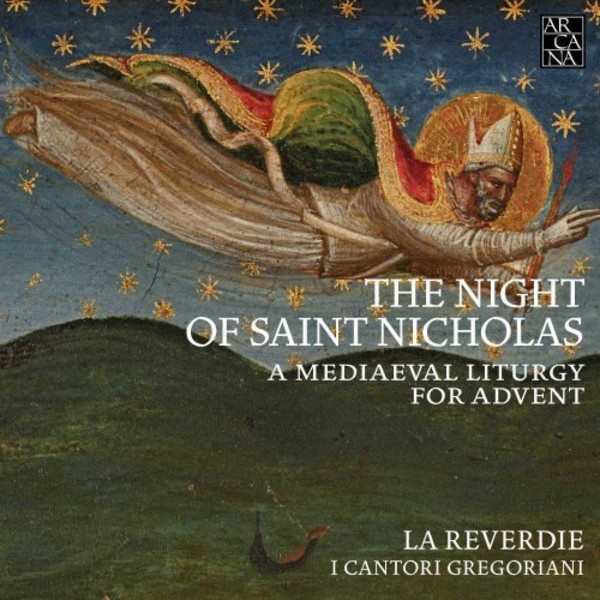 The Night of Saint Nicholas: A Medieval Liturgy for Advent

Winter feasts like the Latin Saturnalia and the Germanic Yule, airborne gift-giving figures like the Norse Ođinn Jólnir, the Slavic Ded Moroz, the Dutch Sinterklaas: from time immemorial December skies have been rather busy. Pagan patterns were readapted to Christianity  and a canonised bishop from fourth-century Asia Minor, Nikolaos, whose feast occurred near the winter solstice, merged with another bearded benefactor. Wotans hood and Nicholass mitre were mixed up, and by the nineteenth century Santa Claus was ready to don new red and white robes and to deliver toys on both sides of the Atlantic.

The pieces on this recording (mainly from a thirteenth-century English manuscript) belong to the liturgy for the eve of the Feast of St Nicholas: they allude to his picturesque feats, such as the rescue of three needy maidens or the taming of a storm. Readings and additional songs come from the repertory associated with this widely popular saint, celebrated throughout the Middle Ages from Italy to Iceland. Originally released in 1998, this joint performance by La Reverdie and Cantori Gregoriani received enthusiastic reviews in several music magazines: For those who want to enjoy some of the best liturgical singing this is highly recommended (Early Music, 1999).

Compere - Missa Galeazescha: Music for the Duke of Milan