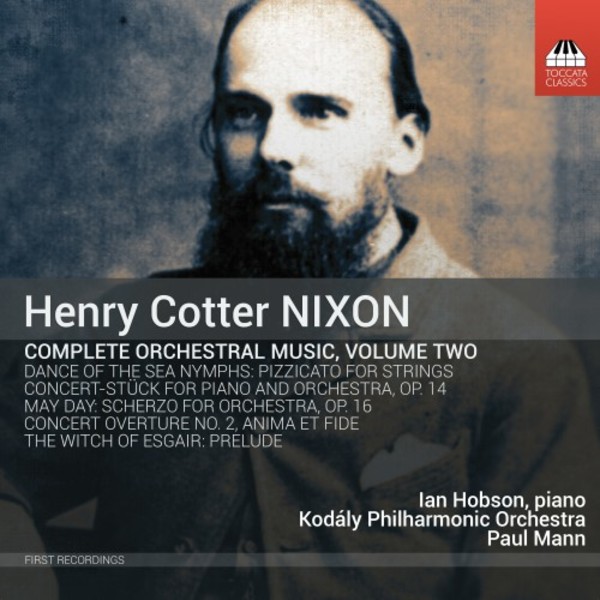 Concert-Stuck for piano and orchestra, op.14
Concert Overture no.2: Anima et Fide
Dance of the Sea Nymphs: Pizzicato for strings
May Day: Scherzo, op.16
The Witch of Esgair

Concert-Stuck for piano and orchestra, op.14
Concert Overture no.2: Anima et Fide
Dance of the Sea Nymphs: Pizzicato for strings
May Day: Scherzo, op.16
The Witch of Esgair

Until Volume 1 of his orchestral music (Toccata Classics TOCC0372) was released in 2016, the English composer-conductor Henry Cotter Nixon (1842-1907) had entirely disappeared from music history. This series presents all his surviving orchestral music in its first-ever recordings. It reveals him to have been one of the most accomplished English composers of his generation, with a style that takes in elements of Mendelssohn, Schumann, Verdi and Brahms. This second volume confirms his ability to handle extended symphonic structures and also presents a Sullivanesque lighter side.

Ian Hobson, pianist and conductor, began his international career in 1981 when he won the Leeds International Piano Competition. This is the thirteenth album that he has recorded for Toccata Classics as either pianist or conductor; more albums in both capacities are in preparation, not least further recordings in his pathbreaking series of the early orchestral music of Bohuslav Martinů. He is also the pianist in the recording of the complete music of Wilhelm Heinrich Ernst.

Paul Mann is a regular guest-conductor with many orchestras throughout Europe, the USA, Australia and the Far East. He is well known for his collaboration with the legendary rock group Deep Purple; among his more recent recordings is the first-ever studio account of Jon Lords Concerto for Group and Orchestra. This is his eighth recording for Toccata Classics: the others have featured the music of Leif Solberg (TOCC0260), Charles OBrien (TOCC0262, 0263 and 0299), David Hackbridge Johnson (TOCC0393), Steve Elcock (TOCC0400) and the first volume in a remarkable series of new works for string orchestra, Music For My Love (TOCC0333), featuring music written in memory of Yodit Tekle, the partner of Martin Anderson of Toccata Classics. Several other recordings of unknown symphonic repertoire are in preparation.