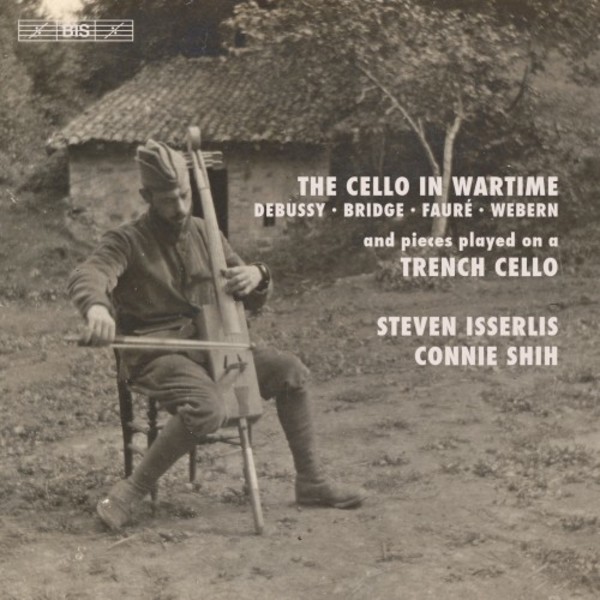 God Save the King

God Save the King

As the centenaries of various events of the First World War are being commemorated, we are reminded of the great battles and the large-scale suffering. To imagine what day-to-day life may have been like in the trenches in Flanders is more difficult, however, 100 years later and with no living survivors of the war to bear witness. Poems and paintings can give us some idea  but, as this disc from Steven Isserlis proves, so can music! The main, more conventional section of the programme is a selection of cello works composed around the time of the war, by composers from three of the countries involved in it: France, Britain and Austria.

This is followed by something rather more unusual, however, as Isserlis exchanges his Marquis de Corberon Stradivarius for an instrument that was once played and heard in the trenches of Ypres. Harold Triggs, the owner of this so-called trench cello, brought it with him to Flanders from England  other soldiers, on both sides of the conflict, constructed their own violins, cellos or flutes on site, from ammunition boxes, pipes and whatever else they could get hold of. These instruments thus become a highly moving testimony to every mans need for beauty and solace and joy, even in the middle of a battlefield. With the delicate support of Connie Shih on the piano (and in fact even pianos could be found in the trenches, even if not concert grands!), Isserlis and his trench cello transport us, for a brief moment, to a trench near Ypres during a quiet spell between skirmishes, with soldiers resting, writing home, playing cards  and with the help of the music  dreaming of a life elsewhere.

A fascinating article by Steven Isserlis on the instruments used on this recording, especially interesting for its reflections on the Trench Cello:

Trumpets and drums may be the martial instruments par excellence, but there is of course much more to war than militarism. Steven Isserliss brilliant new album demonstrates how the cello  an instrument often cited for its kinship, both sonorous and expressive, to the human voice  can give vent to those more private extremes of emotion that arise from circumstances of violent conflict. Released to coincide with Remembrance-tide at a time when commemorations of events 100 years ago are still ongoing, the main part of the disc presents four works composed during the dark years of World War I, by a quartet of composers hailing from three of the belligerent nations. We may now think of the Great War in sepia tones, or in the ghastly browns, greys and blacks of the Western front, but Isserliss playing, vividly partnered by Connie Shihs piano accompaniments, unveils a kaleidoscopic range of colours and expression.

This is immediately evident in an account of Debussys great Cello Sonata (1915) which leaps off the page with grace, wit and a dazzling array of nuance, combining Baroque allusions with a thoroughly modern awareness of the cellos technical capabilities. The first of a planned series of six sonatas (only three were completed by Debussys death in 1918), it appears to have been a conscious broadside at the dominance of Germanic music, but theres not a hint of ill-feeling in this beguiling performance, which under Isserliss matchless hands, equalled by Shihs astonishing variety of textures, immediately takes its place at the head of a very competitive field. Every bow stroke, every pizzicato is made to tell, and the overall shaping is faultless.

The pair uncover similar subtleties in the elderly Faurés surprisingly youthful and open Cello Sonata no.1 in D minor (1917). Again, theres scarcely a hint of the horrors of wartime here (except perhaps for the dramatic first theme of the opening movement), but rather an escape into sunlit reverie, by turns tender and genial. Isserlis and Chih draw unlikely connections between the two French composers, who never saw eye-to-eye, in a performance of gentle depths.

Frank Bridge was famously a pacifist (like his pupil Britten), and his Cello Sonata, composed between 1913 and 1917, confronts the horror of war in its second movement, written when the conflict was in its full terrible swing. In this recording, the movements agitated central section emerges as an anguished cry, all the more remarkable set against the nostalgic expansiveness and lyricism of the first movement. At the end, the listener to this impassioned performance feels a palpable sense of sadness, notwithstanding the musics outwardly joyous close.

There could scarcely be a greater contrast than with the Viennese Anton Weberns Three Short Pieces for cello and piano, op.11 (1914). Aphoristic in the extreme (the fierce middle movement lasts just 20 seconds), uncompromisingly modern, and dynamically contained, these are nevertheless expressively rich pieces, and Isserlis treats them as such, as they appear to stare into the abyss of an imminent apocalypse.

On their own, these four works would make for an absorbing disc. But Isserlis adds an intriguing ten-minute bonus in the form of a mini-recital on a trench cello, an ingeniously portable instrument of the sort used by a number of musicians-turned-soldiers during the Great War. This particular instrument (not, it should be noted, the one shown on the cover, but a larger holiday cello made by W.E. Hill and Sons around 1900) belonged to one Harold Triggs, a keen amateur cellist who fought in the war when the cello accompanied him to the front, and was acquired by the London firm of Beares in the 1960s.

Isserlis constructs a neat little recital of such works as Triggs might have played at the front  a popular classic (Saint-Saëns The Swan), a hymn (Parrys Jerusalem), Ivor Novellos popular song Keep the home fires burning, and, to round things off, God Save the King. The instruments tone may be muted (though large, there are no apparent sound holes on the front), but Isserlis draws a predictably gorgeous sound from it, and Connie Shihs piano accompaniments are perfectly judged for the repertoire and scale. (There were pianos at the front, albeit uprights rather than the Steinway D heard here: Shih makes entirely appropriate adjustments to touch and pedalling so as to compensate.)

The trench cello bonus caps an altogether splendid disc, which can take its place alongside Isserliss earlier, acclaimed, and larger-scale disc In the Shadow of War (also on BIS) as an artistically satisfying commemoration of events and music a hundred years ago, bringing them back to life with exceptional flair and sensitivity.

Crowning all this is perhaps the finest recording of Faurés First Sonata I have ever heard... At its heart lies the visionary Adagio: opening in a state of shimmering drift, it here acquires titanic momentum. They take the finale swiftly, and it pays off in an outpouring of effervescent joy.  Helen Wallace (Chamber Choice)
BBC Music Magazine February 2018