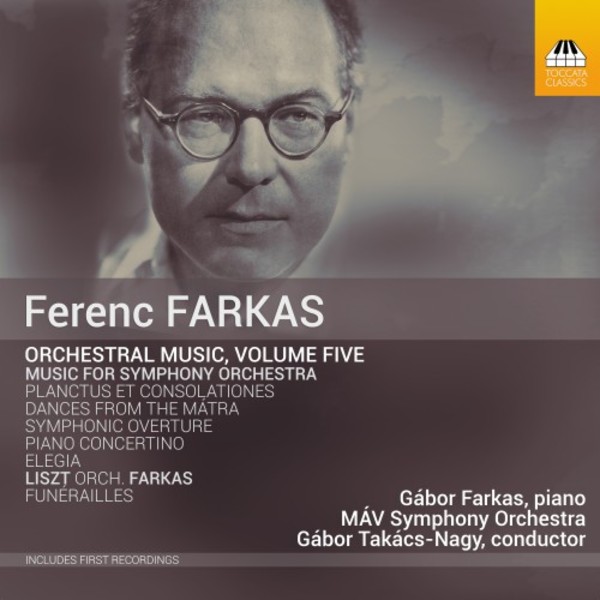 The Toccata Classics survey of the music of the Hungarian composer Ferenc Farkas (19052000) continues with this fifth album of his orchestral music.
Earlier releases have presented the lighter side of his music, with its quasi-Baroque textures and buoyant good humour, but this one shows Farkas working on a larger scale and in generally darker mood. Here he uses the full resources of the symphony orchestra in a number of powerful and dramatic works, including two movements from a symphony that he later withdrew and an orchestration of Liszts Funérailles.
A lighter bonne bouche  the Dances from the Mátra, rather like Kodálys Dances from Gálanta  rounds things off.
Gábor Farkas (no relation to the composer) graduated from the Ferenc Liszt Academy of Music in Budapest in 2005, finishing his doctoral studies there in 2014 at his alma mater under the mentorship of Zoltán Kocsis. In March 2012 he won the Franz Liszt Award (the highest Hungarian state award for artists). Besides his active concert life, he is the youngest professor at the Ferenc Liszt Academy of Music in Budapest and regularly gives master-classes at the Tokyo College of Music.
Gábor Takács-Nagy was a founding member and leader of the Takács Quartet and turned to conducting in 2002. In 2006 he became the Music Director of the Weinberger Kammerorchester and in August 2007 the Music Director of the Verbier Festival Chamber Orchestra. Since September 2011 he has been Music Director of Manchester Camerata and since September 2012 Principal Guest Conductor of the Budapest Festival Orchestra. In January 2013 he was appointed Principal Artistic Partner of the Irish Chamber Orchestra.