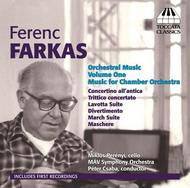 At home, the Hungarian composer Ferenc Farkas (19052000) was one of the leading figures of his generation, but his music has been overlooked further afield.

This first release in a series of recordings of his orchestral music highlights the characteristics that make his works so appealing: catchy tunes, transparent scoring, buoyant rhythms and a fondness for Baroque forms and folk-dances. Several of these works are heard here in their first recording  difficult to believe of such immediately attractive music.

Three more CDs of Farkas orchestral music are in preparation, as is also an anthology of his writings on music (translated into English for the first time) from Toccata Press.

Miklós Perényi (b.1948) is recognised as one of the foremost cellists of his generation. He has appeared in the worlds major musical centres, performing regularly around Europe, in Japan and China and in North and South America.

The conductor Péter Csaba (b.1952), a Romanian-born Hungarian, has also been a major force in musical life in France (where he has lived since 1983), Finland, Spain and Sweden, and has been Artistic Director and Chief Conductor of the MÁV Symphony Orchestra since September 2012.