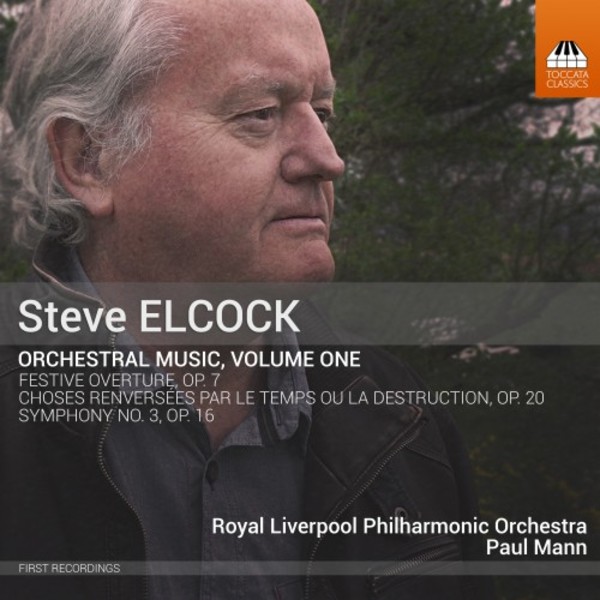 This recording is one of the most important of the 300-plus that Toccata Classics has released, in terms both of its extraordinary back-story and the quality of the music itself.

The English composer Steve Elcock (b. 1957) has been writing music since his teens but, with virtually no contacts in the musical world, told no one what he was doing  and thus has evolved a compelling symphonic style entirely his own. It combines virtuoso orchestral writing with a sense of momentum that has its roots in the Nordic-British tradition of Sibelius, Nielsen, Simpson, Brian and similar figures. His Third Symphony is a vast canvas generating fierce energy and titanic violence, leavened at times by a sardonic sense of humour. Choses renversées par le temps ou la destruction is a dark symphonic triptych where fragile beauty is constantly at threat from the forces of ignorance. The breezy, buoyant Festive Overture has a Waltonian swagger that barrels on with relentless jollity.

Paul Mann is a regular guest-conductor with many orchestras throughout Europe, the USA, Australia and the Far East. He is well known for his collaboration with the legendary rock group Deep Purple; among his more recent recordings is the first-ever studio account of Jon Lords Concerto for Group and Orchestra. This is his eighth recording for Toccata Classics: the others have featured the music of Leif Solberg (TOCC0260), Charles OBrien (TOCC0262 and 0263) and the first volume in a remarkable series of new works for string orchestra, Music For My Love (TOCC0333), featuring music written in memory of Yodit Tekle, the partner of Martin Anderson of Toccata Classics. Paul Manns further recordings of the complete orchestral music of Henry Cotter Nixon (18421907), also with the Kodály Philharmonic Orchestra, are also underway (TOCC0372, 0373 and 0374).

The whole disc is expertly directed by Mann, and the recording is of the top drawer.  Fanfare on TOCC0393 (music by David Hackbridge Johnson)