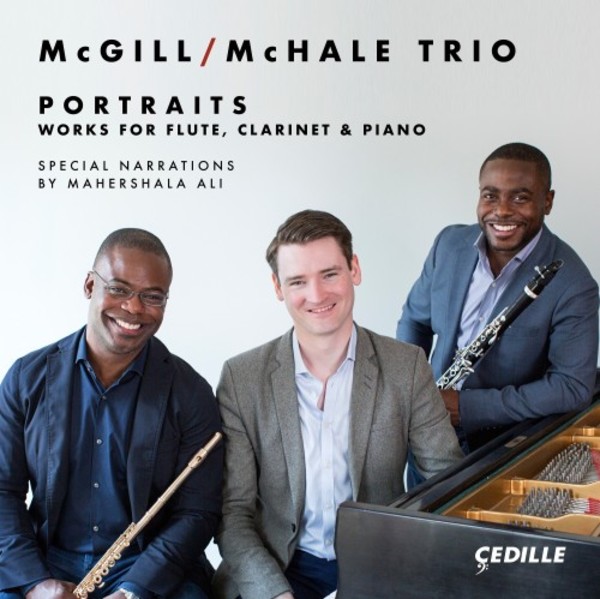 The lamentation of Owen O'Neil

A Fish Will Rise

The Lark in the Clear Air (arr. Michael McHale)

The lamentation of Owen O'Neil

A Fish Will Rise

The Lark in the Clear Air (arr. Michael McHale)

The McGill/McHale Trio, an international all-star ensemble of flute, clarinet, and piano, makes its recording debut with Portraits, featuring world-premiere recordings of new compositions and arrangements for this captivating combination of instruments. Trio flutist Demarre McGill, a Chicago native, has served as principal flute of the Seattle, Dallas, and San Diego symphony orchestras, as well as acting principal of the Metropolitan Opera Orchestra. His brother, Anthony McGill, is principal clarinet of the New York Philharmonic and former principal of the Met Orchestra. Michael McHale, one of Irelands leading pianists, has performed as soloist with the Minnesota, Hallé, Moscow, and Bournemouth Symphony Orchestras and all five of Irelands major orchestras.

Colemans Portraits of Langston and Schoenfields Sonatina receive their world-premiere recordings. These trio versions of Rachmaninovs Vocalise, Hammonds The Lamentation of Owen ONeil and The Lark in Clear Air are also world premieres on record. Formed in 2014, the McGill/McHale Trio has won critical acclaim for concerts in New York, Philadelphia, and Washington DC, among other cities. The Philadelphia Inquirer proclaimed, They can play off each other with hair-trigger precision, their blends are  amazing, creating a hybrid sonority I dont think Ive previously heard.