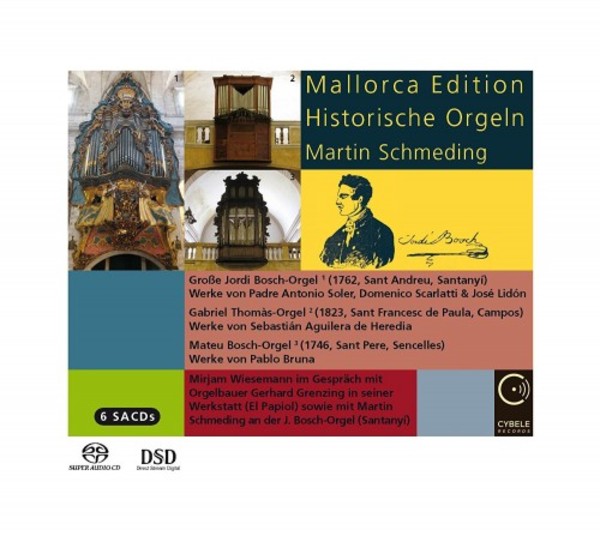 The Jordi Bosch Organ of St. Andreu in Santanyí (Mallorca) built in 1762 by one of the most important organ builders of the Iberian region. Jordi Bosch, is one of the most beautiful 10 organs in Europe. Its history, unique sound and architectural form make it a legendary instrument (25 pipes per key).
Following their highly acclaimed 17-part Max Reger Edition the multi-award-winning organist Martin Schmeding and Ingo Schmidt-Lucas from Cybele Records have set a comprehensive recording project on six SACDs. In addition to the music, two conversations are included on SACD6: Mirjam Wiesemann talks with organ builder Gerhard Grenzing and with Prof. Martin Schmeding at the historic Jordi Bosch Organ in Santanyí.
In Santanyí works by Padre Antonio Soler, Domenico Scarlatti and José Lidón were recorded on 3 SACDs, in Campos works by Aguilera de Heredia (1 SACD) and in Sencelles works by Pablo Bruna (1 SACD). Each composer will be introduced in detail on a separate SACD.
The works of the Spanish early classics and the Organ of Santanyí in German-speaking countries are under-represented in relation to their great importance.
After the restoration of the Jordi Bosch Organ and the reconstruction of the mixture and trombone in the 1980s, Gerhard Grenzings son Daniel Grenzing performed a thorough cleaning and tuning of the instrument in 2011 so that the recordings shine in its full glow.
Contents:
Music (382:53 min.) - works by:
- Padre Antonio Soler
- Domenico Scarlatti
- José Lidón
- Sebastián Aguilera de Heredia
- Pablo Bruna
German voice (76:29 min.):
- Mirjam Wiesemann in conversation with organ builder Gerhard Grenzing in his workshop (El Papiol) and with Martin Schmeding at the Jordi Bosch organ (Santanyí)

This truly remarkable collection is one of the most must have organ release I have come across in 2017.  (Recording of the Month)
MusicWeb International