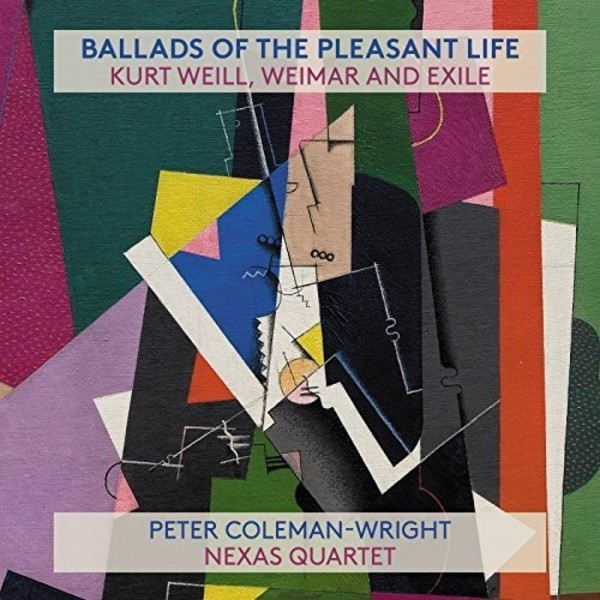 Ballads of the Pleasant Life: Kurt Weill, Weimar and Exile

Die Rosen und der Flieder (The Rose and the Lilac)

Die Rosen und der Flieder (The Rose and the Lilac)

You will hear music created on the brink of cataclysm, proclaiming as it does with such intensity the survival of art and beauty in a hostile world. Any new recording of music from the short-lived Weimar Republic deserves our rapt attention, and now the world-renowned Australian baritone, Peter Coleman-Wright, offers a thrilling selection from this repertoire.  Barry Humphries, in his introduction to Ballads of the Pleasant Life.

Distinguished baritone Peter Coleman-Wright steps off the worlds opera stages to present a rare recording of music close to his heart: the remarkable songs written as the Weimar Republic descended into Nazism in the 1920 and 30s, by composers at home in Germany and Austria who were then forced to flee into exile. These songs capture the spirit of the times: defiant, soulful and searching, but also capable of moments of exuberant joy and hope.

The music of Kurt Weill sits at the heart of the album. We meet Weills infamous creation Mack the Knife, who first saw the light of day in 1920s Berlin and soon became a smash hit. A prominent Jew, Weill fled Germany in 1933. In America, he found his new musical home in the theatre, collaborating with lyricists Ira Gershwin and Maxwell Anderson, including his hilarious catalogue of Russian composers Tschaikowsky and the timeless ode Therell Be Love, Life and Laughter. For Weills generation, music was the language of protest.

Austrians Hanns Eisler and Alexander von Zemlinsky wrote popular songs from the perspective of the downtrodden: the miners, the cotton packers and many more besides. Amidst all this, there were flashes of humour, and the desire to take the rare joys of life by both hands. The album closes with a series of love songs, often sentimental, always heartfelt: film composer Robert Stolzs praise for the beauties of lifes autumn years; Arnold Schoenbergs elegy to the exquisite agony of separation; and Franz Schrekers melancholy tribute to transient love.

Peter Coleman-Wright is regarded as one of the worlds leading baritones, with a stellar career in the worlds leading concert halls including Royal Opera House, Covent Garden, the Met in New York and the Sydney Opera House; he finds the perfect foil for this music in the Sydney-based Nexas Quartet. The arrangements of these songs for baritone and saxophone quartet, created especially for this album, reflect a combination that would have been familiar to the clubs and bars where much of this music was first performed.