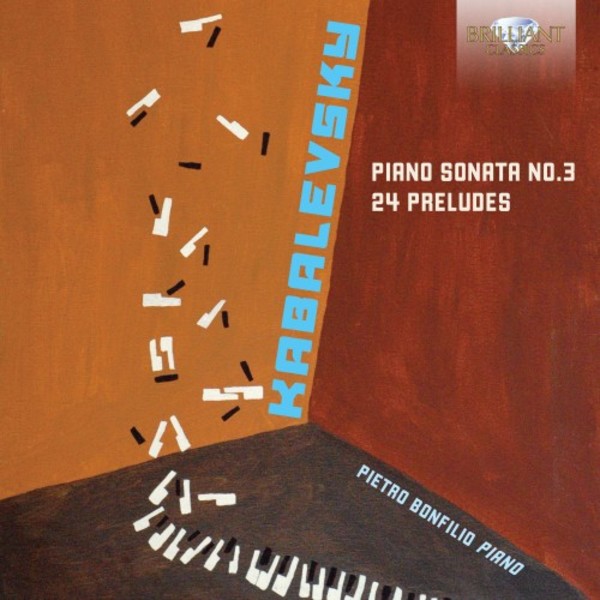 During his lifetime Dmitri Kabalevsky (1904‐1987) was considered by the authorities to be one of the top five composers of Russia, on a par with Prokofiev and Shostakovich. He was praised for his formalism, general popular style and patriotism. He was not a revolutionary, and this caused his fame to decline after the collapse of the Soviet Union. His music however has a strong identity, vigorous, alternating power with lyricism, and rooted in the rich folklore of Russia.
Once considered in the same breath as Prokofiev and Shostakovich, Kabalevskys star has waned somewhat (the same fate has befallen both Myaskovsky and Khachaturian), both in his native Russia and farther West, where he is primarily remembered for his exuberant orchestral potboiler, the overture he wrote to an opera on a Romain Rolland story, Colas Breugnon. The opera won both a Lenin Prize and Rollands approval  no small feat  but has been completely forgotten. However, the offbeat rhythms that made the overture an instant hit also lend an upbeat, funky character to the opening movement of the Third Piano Sonata.
Kabalevsky wrote the Sonata in 1948, shortly after the premiere of another opera, Taras and his Family, based on the same gory narrative which inspired Janáčeks orchestral fantasy, Taras Bulba. Excellent music (much Prokofiev), wrote Myaskovsky in his diary, but the libretto is dreadful. The composer may have taken note, for although the opera was not revived, he used several of its themes in the Sonata. Sweet playfulness and calm characterize the first theme, the gliding movement of the waltz in the second, and a spirit of youthful fanfare in the finale.
The 24 Preludes were composed in 1943 and dedicated to Myaskovsky. Kabalevsky had lately (like Shostakovich) been in siege‐ridden Leningrad, and the wartime mood may have contributed to the patriotic flavour of the Preludes: each one uses a theme from folk‐music collections of Rimsky‐Korsakov, Balakirev and Liadov.
Their first performer was the Russian virtuoso Yakov Flier, who was sufficiently convinced of their merits to include them in his international tours. They are not mere transcriptions of the songs, he declared, but new, original works of great cohesion, a cycle in which each part has a meaning of its own. Each Prelude expresses a particular mood and significance... It is one of Kabalevskys most profound and successful works. Compared to works of political expediency such as the Song of the Party Membership Card from 1956, Flier was doubtless right.
Played by the highly talented young Italian pianist Pietro Bonfilio, who expresses his love for the Russian culture with this beautiful recording.